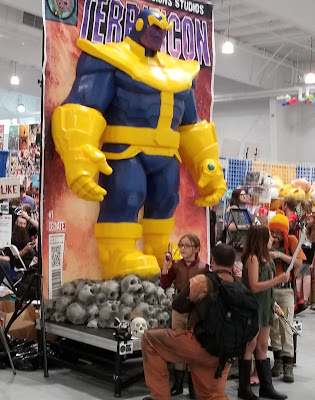 So, since I'm still "recovering," I'll see how quickly I can get Part Three of my report on Terrificon 2018 written. I plan to lean a lot on illustrations!

I suppose the real "star" of this convention, if there was one, was neither a celebrity nor a comic book professional. No, it would be a fictional character named Thanos, who's been in comics since 1973, and in the Marvel Cinematic Universe as far back as 2012.

Actually, Thanos' first comic book appearance was in Iron Man #55, which was cover-dated February, 1973. Therefore, that issue actually hit the stands in late 1972, if it matters. The movie-going public is most familiar with Thanos as the main baddie of 2018's Avengers: Infinity War.

I will spare you all a lengthy & detailed history of the villain, both in the comics and movies as well as the behind-the-scenes stuff involving his creation by writer/artist Jim Starlin. I figure, if you're a comic book and/or movie buff who really cares, you know most or all of that stuff already. And if you don't particularly care... Why should I bother? Heh.

I will, however, give you a look at a Jim Starlin sketch of Thanos which was drawn before Thanos ever appeared in a Marvel comic! 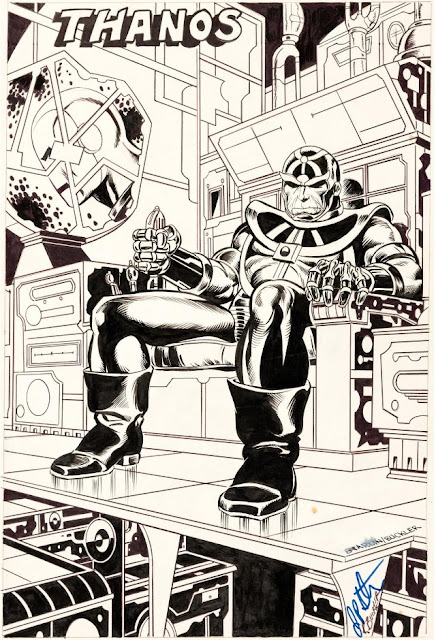 When first introduced, Thanos mainly fought Marvel's original Captain Marvel character (whose comic book I did not read). He returned a while later to fight Adam Warlock, in a far-reaching saga that saw the deaths of both Adam Warlock and Thanos himself.

By the way, back in the early-to-mid-1970s, Jim Starlin occasionally drew self-portraits in his comic stories. Here are only two of them: 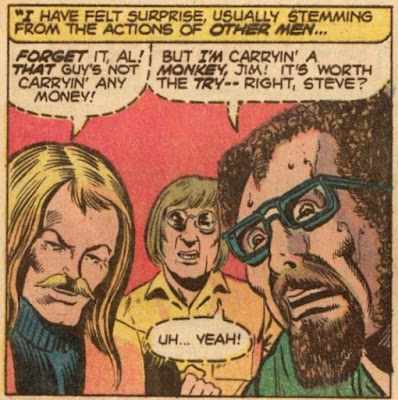 Earlier, I mentioned the "deaths" of both Thanos and Adam Warlock. However, these being comic books, so-called "dead" characters have a tendency to return. Thankfully, Jim Starlin had returned to Marvel, so he brought them both back to life -- no one else could, realistically -- in early 1990, in the pages of Silver Surfer, a title for which Starlin had assumed the writing chores.

In my not-so-humble opinion, they should have put every damned one of them under an umbrella title like The Infinity Cash Cow! 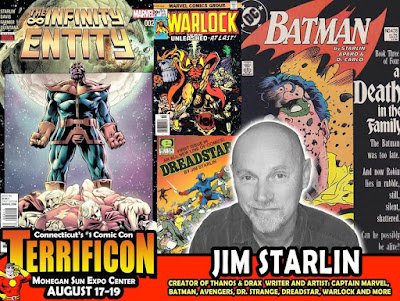 Not only was Jim Starlin himself at Terrificon 2018, but so were many other pencillers and inkers who've worked with the character of Thanos, usually in stories written by Starlin.

One of the inkers was John  Beatty. I had him sign one of the comics I'd brought, which I'll show you later, for reasons which will be apparent... uhhh... later. 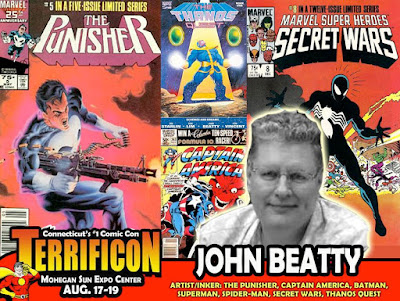 Another inker was Joe Rubinstein, who inked some of the issues of The Infinity Gauntlet. 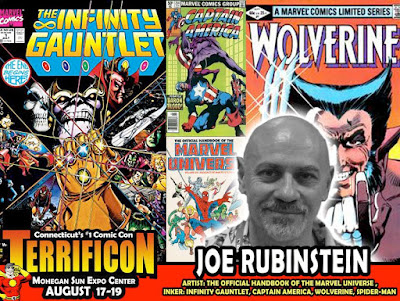 I had him sign issue #6, one of the issues he did. 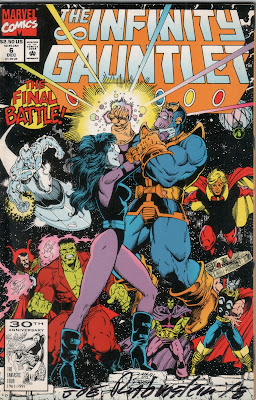 But even though they worked on The Infinity Gauntlet too, I did not get the autographs of either writer Starlin or penciller Ron Lim on this particular comic, mainly to save myself a little money!

Unfortunately, I'd forgotten that Joe had also inked the Captain America issues reprinted in the graphic novel that I'd had signed by Roger Stern (as told here), or I would have had Joe sign the graphic novel, too! 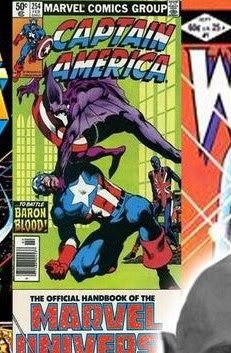 Another professional I approached was artist Ron Lim, who's penciled several storylines concerning Thanos, including the Starlin-written issues of Silver Surfer which reintroduced Thanos and Adam Warlock to the Marvel Universe. 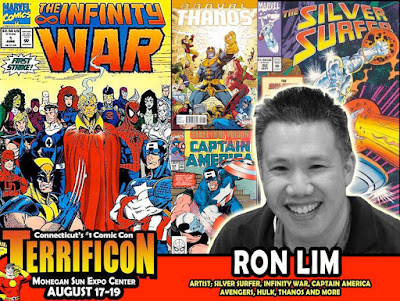 One of the comics I had Ron autograph was Silver Surfer #50, the issue with the glitzy silver foil embossed cover. (I didn't have Starlin, its writer, sign this one. I had other books for him to sign, as you'll see later!) 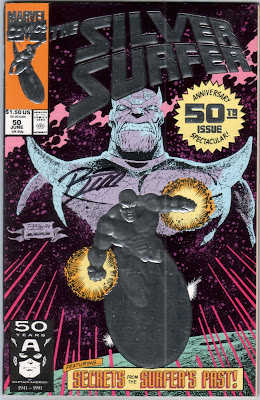 Oh, I should point out that that pale white line that bisects my scan of the cover is not a crease. It's a glitch in my scanner! 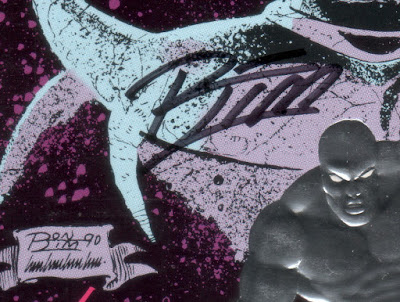 Friday evening, John and I attended the "Forging the Infinity Gauntlet" panel with (from left to right) Ron Lim, Jim Starlin, Joe Rubinstein, and (if the Terrificon program was correct) panel host John Siuntres. It was a terrific (pun intended) prelude for the next day, when John and I actually planned to meet Jim Starlin himself!

I was so glad that nobody asked Starlin how he felt that Marvel was making zillions off of characters and concepts which he created, but Marvel owns. Personally, I can only hope, although not assume, that whenever Jim writes something involving Thanos nowadays, Marvel pays him something commensurate with his (Starlin's) true value to the company.

The next day, John and I arrived rather early, but in no time at all, the line to see Jim Starlin (who hadn't yet arrived) looked like this: 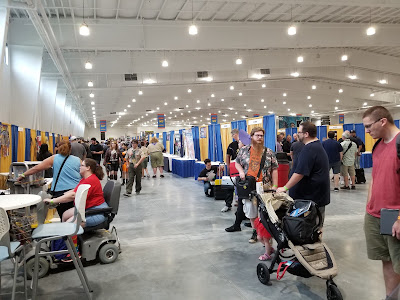 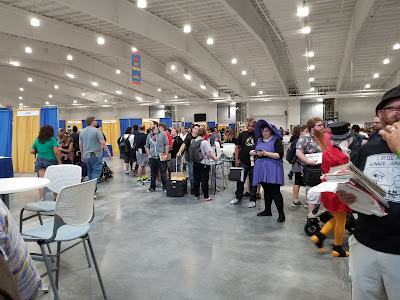 Once he had arrived, and I got to meet him, the first comic I gave him to sign was the first issue of Star*Reach, an independent title whose first issue went through four printings. The Starlin cover shown below was the back cover on the first two printings (1974 and 1975), but it was the front cover on the third and fourth printings (1977 and 1978). My copy is a third printing. I assumed that a copy of Star*Reach #1 would spark a comment from Starlin, as I hoped he didn't see one of those anywhere near as often as any of his Marvel or DC work. I was wrong. 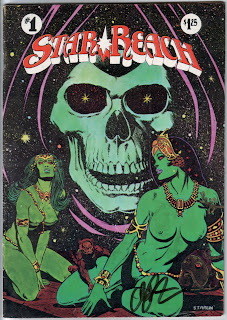 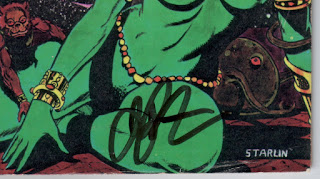 However, he did comment on the second book I handed him, a copy of Marvel Graphic Novel #1, featuring an incredible story called "The Death of Captain Marvel." He noticed it was a first edition when he signed it, inside.

Here's the cover, followed by a photo of Michelangelo's Pieta, which inspired the cover: 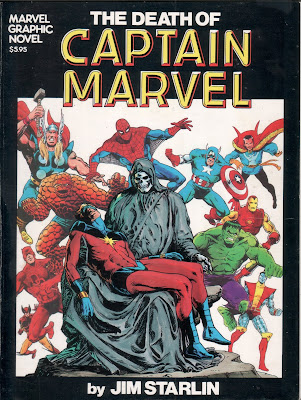 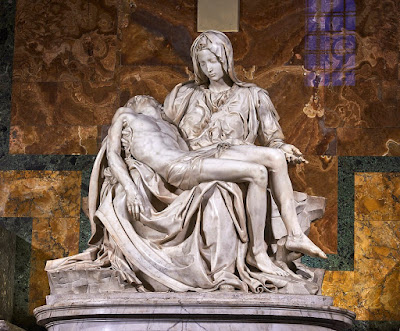 I took that opportunity to bring up the back cover illustration, shown below: 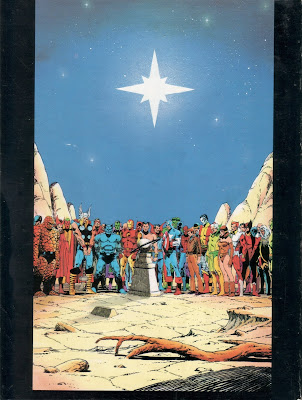 Namely, I mentioned the sneaky little cameo by none other than DC Comics' Superman, nearly hidden by all the Marvel characters standing in front of him! 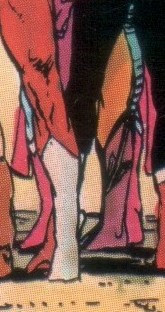 The last comic I had Jim sign was The first issue of The Thanos Quest, precursor to The Infinity Gauntlet. I'd previously had that book signed by penciler Ron Lim and inker John Beatty. 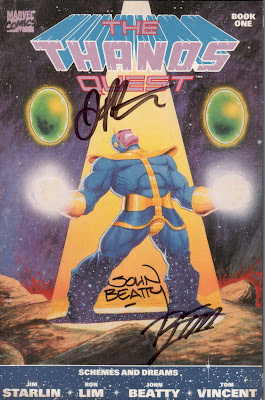 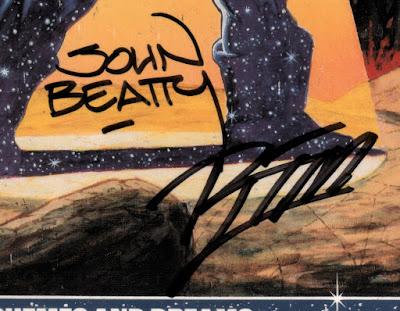 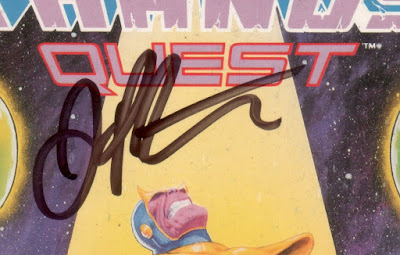 I wanted to share one more thing with you, another photo of Jim Starlin, this time posing with his creation. 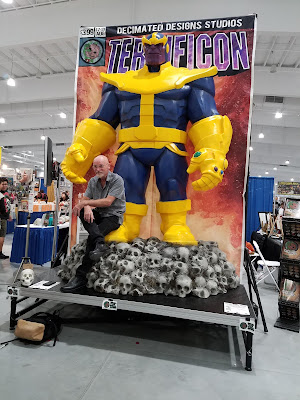 Hm. I wonder if they would've let me sit on that display for a photo or two? No, probably not...

But Starlin does look kinda happy after all, don't you think? 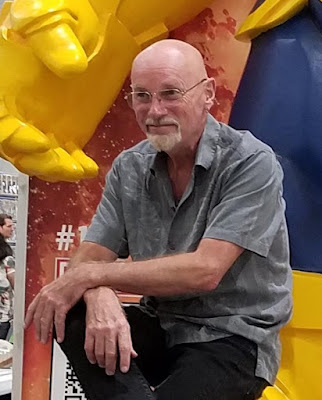 So, there you have it, fellow babies! Three chapters talking about every comic pro I got to talk with at Terrificon 2018. Everybody! Evvvvvvvv'rybody!

Looks like there's gonna be one more chapter after all!

P.S. ~~ COMING SOON! (Watch for it!) A Re-Posting of One of the Best (and Longest) Stories I Ever Posted on This Blog!
Posted by The Silver Fox at 6:59 PM