The above illustration graced my blog's sidebar for two or three weeks, promising to give you my "report" on TerrifiCon... or is that Terrificon? Or maybe TERRIFICon? It's spelled all three ways on their website! Well, by "report" all I mean is that I'm about to tell you the people and panels I went to see, and what a great time I had! This will be another multi-parter, but I promise you, it'll have nowhere near as many chapters as my recent "Insect Asides" series. I should also point out that I'm not necessarily going to describe any events in strict chronological order!

Terrificon 2018 was held from August 17-19 at the beautiful and spacious brand-new convention center at Uncasville, Connecticut's Mohegan Sun Casino & Resort. Last year, My friend John and I went to Terrificon 2017 on only one afternoon (as described here and here), and I managed to get a paltry four signatures from comic book professionals.

This year, John and I planned to attend on both Friday and Saturday. Like last year, my main objective was to obtain the signatures of various comic book artists and writers, but with two days to play with, I'd obviously be able to meet more of them. There were also a few TV and movie celebrities whom I had hopes of meeting, plus John and I also wanted to attend some "panels." (Panels basically consist of a handful of people discussing a particular comic-related subject. Some panels, of course, deal with other various forms of entertainment.) 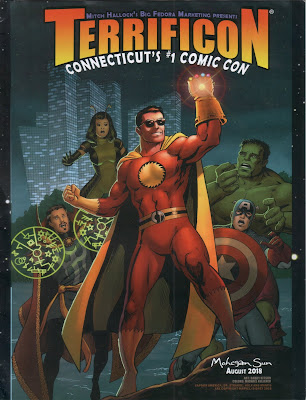 John and I were both quite impressed with Mohegan Sun's new convention center. We each grabbed a copy of the convention's program and walked in. The very first thing I saw that impressed me was a giant statue of Thanos, a Marvel Comics villain who's been around for forty-five years... and I've been reading about him almost that long (late 1975), plus you just know I back-tracked and read his earlier appearances, right? Thanos, of course, was the main antagonist in this year's blockbuster film, Avengers: Infinity War. (Several writers and artists known for working with Thanos, including his creator, Jim Starlin, were at Terrificon. More on that in Part Two!) 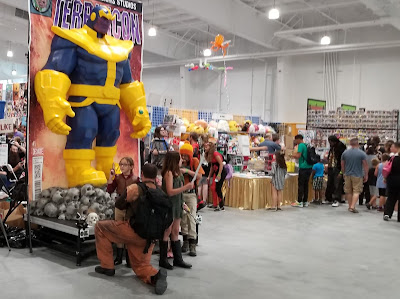 I've always loved the character of Thanos, so I figured that this was a good omen that I was going to have a great time!


The movie and TV celebrities I was hoping to meet were:

Jon Bernthal, who had a secondary but important role in The Wolf of Wall Street, but is probably best known for his current role of the Punisher in Netflix's series of the same name. Unfortunately, he had to cancel his appearance at the last minute. 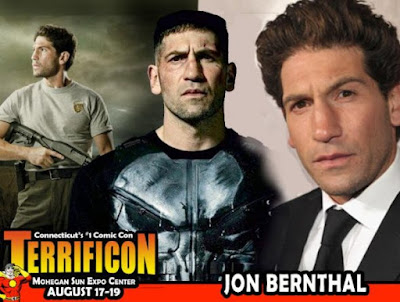 Ralph Macchio, famous for starring in The Karate Kid, as well as being in The Outsiders, My Cousin Vinny, and many others. 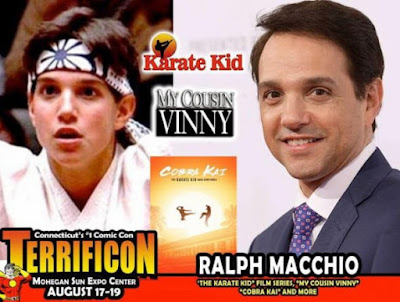 Sam Jones, who portrayed the titular hero in Flash Gordon, as well as a somewhat demented version of himself in Ted and Ted 2. Pom Klementieff -- *sigh* -- who's played Mantis in Guardians of the Galaxy Vol. 2, and Avengers: The Infinity War. 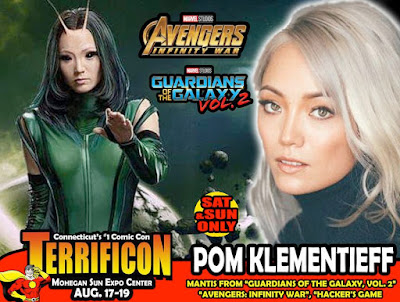 And last, but certainly not least, Henry Winkler, a man with several acting roles in his resume, the most famous being Fonzie on ABC's Happy Days! 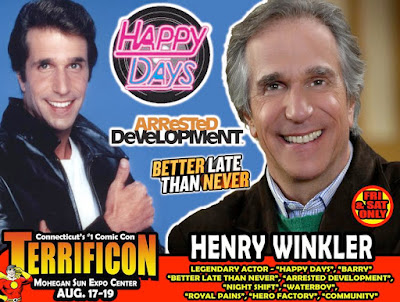 Well, fellow babies, I may as well confess right here that I didn't actually get to meet any of these stars! Things just didn't work out that way.

However, Henry Winkler was scheduled to appear on one of those panels I mentioned earlier. Instead of a panel moderator discussing Henry's career with Henry himself and the audience, Mr. Winkler took the stage all alone and regaled the crowd with a well-prepared talk about his personal history, from being born to a couple of rather unsupportive parents all the way through his fame & fortune and an actor, as well as little side trips to some of his other successful ventures in life (such as the children's books he's written). He turned out to be quite the motivational speaker. It made me (and John) wonder if he'd ever done that professionally, like Tony Robbins, Wayne Dyer, Susan Powter, and so many others.

As you can see, Terrificon could have fit several people besides Henry on that panel. They weren't necessary. 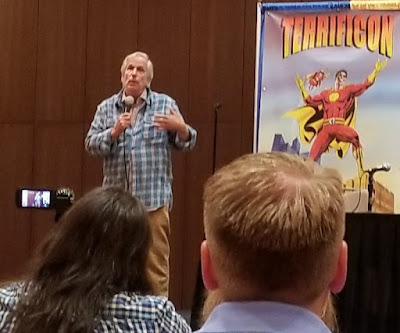 So, you may be wondering, did I get to meet anyone?

Oh, sure. I met writer Mike W. Barr, and had him sign my copy of The Brave and the Bold #200, and my trade paperback collecting the Camelot 3000 series Barr did with artist Brian Bolland. 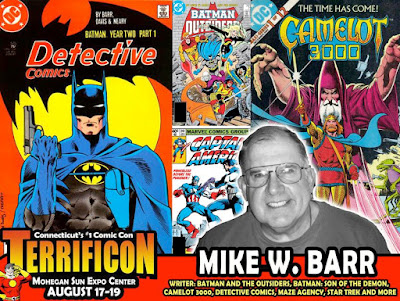 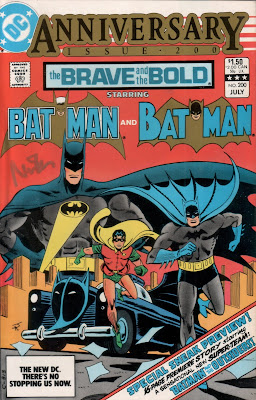 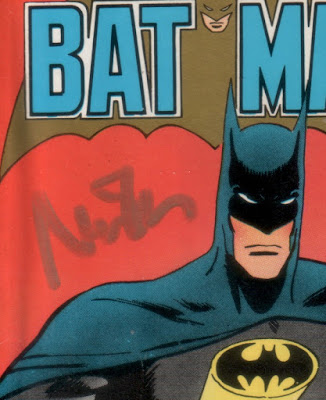 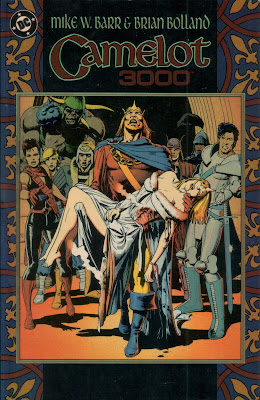 Sorry, I can't show you the signature on this one! Mike W. Barr signed this one on the
inside, and I didn't want to chance wrecking the binding by scanning the interior for this post.

Writer Roger Stern has written a lot of comics which I've enjoyed over the years, but the coolest thing I could put my hands on in the days leading up to the convention was my copy of a trade paperback of stories he wrote which artist John Byrne drew. The stories featured one of my all-time favorite characters, Captain America. 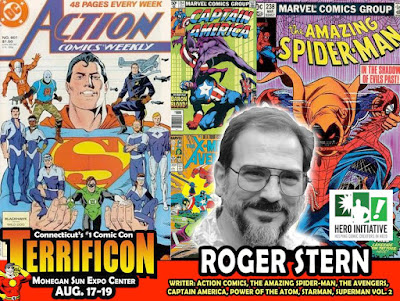 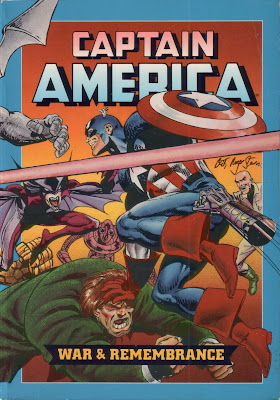 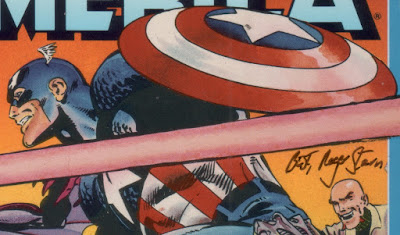 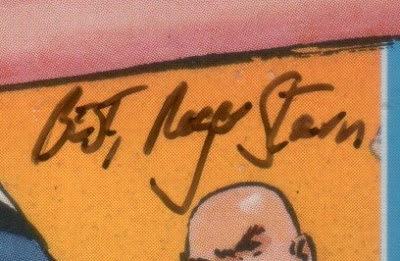 Most of the writers and (especially) artists charge something for their signatures. How much they charge varies widely. An autograph from comic legend Neal Adams autograph will cost you fifty dollars! Roger Stern had a sort of "tip jar" and when I asked what he charged for his signatures, he said that was up to me. Unfortunately, all I had in my wallet were twenty dollar bills. I explained that to him, and he just smiled and told me not to worry about it.

So no, I didn't "worry." But the next day I returned and stuffed a couple of bucks in the jar!

I also got a signature from a writer named Paul Kupperberg, who'd written one series in particular that I loved: Arion the Immortal. This six-issue mini-series was a sequel of sorts to an ongoing series called Arion Lord of Atlantis. The earlier series had established that Arion had been born in 45,000 B.C. and frankly, I didn't follow that first series. However, when I read about the concept of the upcoming mini-series, I was hooked. 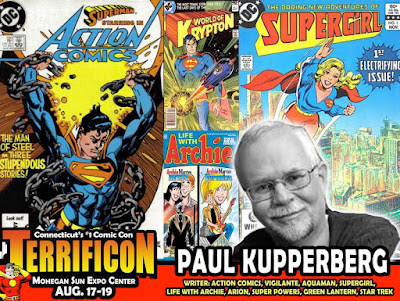 The seriocomic second series established that Arion was immortal, and that he and much of his supporting cast from Arion Lord of Atlantis were all still alive in the late 20th century -- albeit looking like any ordinary elderly people -- and living in Greenwich Village!

If there are any actual "rules" for owning and operating a comic shop, one of them is that you should order your store's stock according to how many items you actually believe you'll sell, and not order extra copies of stuff just because you happen to like it.

Well, at that time (1992) I owned and operated a comic book and collectibles store. I had so much faith that Arion the Immortal would be a good read, I broke that rule! I ordered extra copies (just a few, not hundreds, nor even dozens) and placed one in the subscription files of several of my regular customers. I made them an offer I'd never made before nor since: If they would give the first issue of the title a try, and didn't like it, they could return the book for a full refund (only $1.50, but still...).

As it turned out, some of them signed up for the next five issues, and some didn't, but not one of them asked for their money back.

Of course, I told Paul Kupperberg that little story when I had him sign my copy of Arion the Immortal #1. Not only that, but the series' artist, Ron Wilson, was also at Terrificon that weekend. (I'd forgotten that he drew it!) So I got both of them to sign it (and you know I told him the story too). 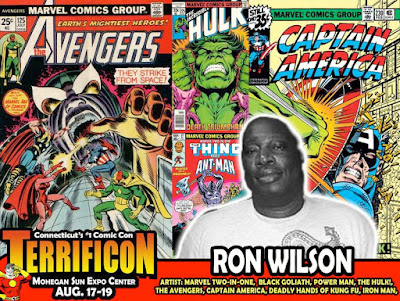 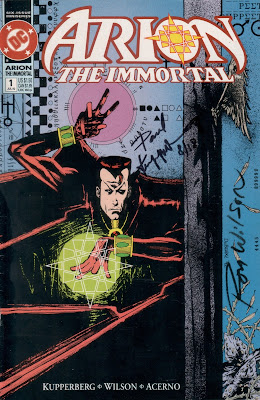 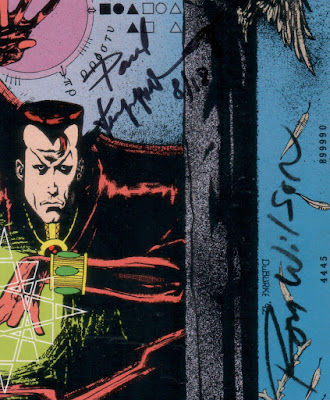 Okey-dokey, folks. I'm going to stop here and give you the old "To Be Continued." I'll see you with another "Comical Wednesday" post next week, plus I'm almost certain to give you a non-comic-related post this coming Saturday or Sunday.

Captain Terrificon, Terrificon logo and TerrifiCon promotional images and copy are Copyright AND Trademarks of Big Fedora Marketing, LLC. and Mitch Hallock 2015, 2016, 2017 and 2018. All rights reserved.
Posted by The Silver Fox at 11:24 AM