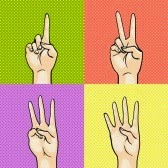 When I was a young boy, roughly fifty years ago, some of my friends had parents who were... Well, let's just call them “counters.” If a friend of mine was misbehaving, especially in public, the mom or dad would start counting aloud, as a warning that my buddy had better shape up, pronto.

Some counters counted to three, some five, some ten... You never knew what their cut-off point was, because the counters never counted down –- “Five, four, three...” –- they always counted up. If the little sucker hadn't shaped up by the time the count was finished, though, he'd get a smack! (And I don't mean a kiss.)

(What really sucked was if a kid was with one of those parents that hit other people's kids... and yes, we had them then. Those poor children never knew where the count would end, which effectively shot the “warning” aspect all to hell! “One... two... three...” WHACK! “Hey! My mom always gives me till ten!)

Anyway, now that corporal punishment has fallen out of vogue, I'm curious about one thing: There are still parents out there who count like that when the child's being a brat. The question is, if said child doesn't toe the line by the time the parent's counting limit is reached...

What does the parent do?

By the way, if anybody wants to turn my comment section into a serious forum on the pros and cons of corporal punishment... please don't.

Thanks for your time.
Posted by The Silver Fox at 10:05 AM