In the meantime, as the Beatles would've said... "HELP!"

My StatCounter tells me that people have been checking out this blog virtually every day throughout the month of March, in spite of my "Closed for Remodeling" and "Re-Opening Soon!" designations. To me, that signifies that there are quite a few of you out there who honestly give a damn about this blog.

Glad to hear it. Or see it. Whatever. You know what I mean.

Do you care enough to give me a little... assistance? (Non-financial, don't panic!)

Before my brief sabbatical, I had begun a series of posts about something I called "The Reunion of the Super Pets." That got interrupted because I was waiting -- and still am waiting -- for a "snail mail" letter from the artist of that project about his involvement with the project.

To kill time while waiting for his letter, I started a series called "The Story of 'The BIRD' and Me" which was originally going to fill in some "before" and "after" behind-the-scenes details on a character I co-created over twenty years ago. Before I knew it, however, that project morphed into a history of how I became -- in no particular order -- a comic book collector, a comic book dealer, a professional writer, and (briefly) a professional comic book writer! And although, as I said, my comic writing "career" was fairly brief, telling about it and everything else was -- you know me! -- much less so.

Finally, I figured that I'd involve you -- all of you -- in this decision, since you're all (presumably) what they call "interested parties." Forget, for the moment, that little section at the bottom of this blog that says, among other things, "The Lair of the Silver Fox will not always be what you expect it to be, or even -- sometimes -- what you want to see. But then again, if it were, it'd be your blog, and not mine, right?"

So, here's what I'm asking you to do: Leave a "vote" in the form of a comment on this post -- as short or as long as you care to make it -- telling me what your choice is, based on the list below. ("Votes" sent via private email will not be accepted, sorry!) You can vote, and even change your vote, at any time, starting now, up to and including 11:59 PM on April 3rd.

Here goes:
And keep in mind, you may never get a chance to "influence" this blog like #4 again.

So. The "voting" begins now, and ends at the very last minute of April 3rd. And if you don't vote, and April 6th brings a post on a subject that doesn't exactly thrill you, you'll have only yourself to blame!

And if I get stuck writing about f***ing amoebas, I'll have only myself to blame!

Just as a little "filler" until I start posting here again, here's a random stack of publications that I've had something to do with: 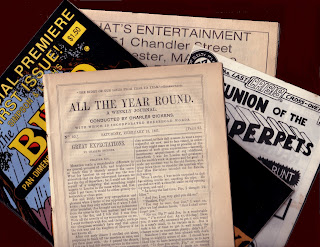 Oh, wait! Silly me! I only wrote (or partially wrote) three of the four! The British publication resting on top is a little beauty from my private collection! (That's the real reason I scanned it with a bunch of stuff that I did write. I wanted you to know that it's actually something I own, and not just an image I swiped from the internet!)

Here's a better look at one of the weekly magazines Charles Dickens serialized much of his writing in... All the Year Round. So this is kind of a first printing before the first printing, if that makes any sense! (The serialized format inspired the blog you're reading, by the way... although I certainly don't claim to be at the same level of talent as Dickens!) This issue features a segment of my favorite Dickens work, Great Expectations. It's from February 16th, 1861... about two weeks before Abraham Lincoln was sworn in as the 16th President of our country! 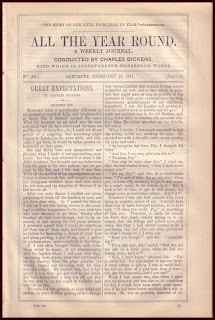 I actually own a few of these literary collections -- Charles Dickens is not the only author contained herein -- as well as some issues of this magazine's immediate predecessor, Household Words. And as the saying goes, I just wanted to share that fact with you.

I also wanted to show y'all that I own a lot more than old comic books, y'know?

Labels: "All the Year Round", "Great Expectations", Charles Dickens 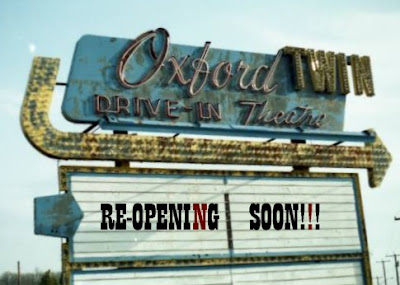