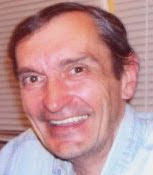 I am so ticked off right now... but not at anything or anyone that would make this a David'Z RantZ post.
No, this time I'm kind of angry with myself.
I thought that the birthday of my old -- "old" as in long-time -- friend and writing partner, Skip Simpson (who also occasionally contributes to his own blog, Life with Skip), was January 31st. I was wrong. It was January 30th. 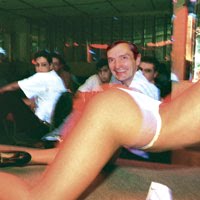 Then again, I suppose it's fitting that I "skipped" his birthday, however inadvertently. Ha-freakin'-ha.
Umm... Sorry, Skip. Happy birthday.
[expletive deleted]!!! 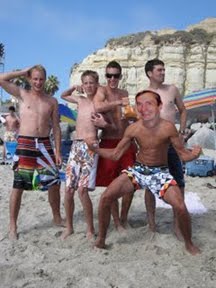 At least I'm not reporting anyone's death this time around, thank God!* 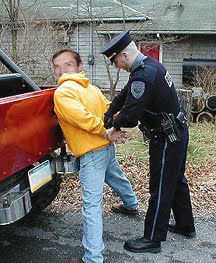 Thanks for your time.
Posted by The Silver Fox at 11:57 PM 4 comments: 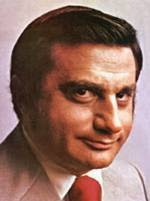 Okay, so I was wrong...
After yesterday's post about Charlie Callas, I figured it would be at least a few days before someone I'd admired -- especially someone whom I was a fan of at about the same freakin' time in my adolescent life -- would die, but as my old friend Wayne used to say, "The best-laid plans of mice and men are often cheesy!"
Less than twenty-four hours of learning about Charlie's passing, I learned that impressionist David Frye had died a few days ago.
Like Charlie Callas, David Frye was familiar to me from countless variety shows during the late 1960s before his LPs started coming out. (I bought the first three, I Am the President, Radio Free Nixon, and Richard Nixon Superstar. It gives me a perverse pleasure knowing that his record label for the first two was Elektra, the same label that put out The Doors... but that's just me.) Frye did a lot of the contemporary standard celebrity impressions (Henry Fonda, James Stewart, Kirk Douglas, George C. Scott, etc.), and his William F. Buckley, Jr. was hilarious... but his real forte was imitating politicians.
The earliest political impression I clearly recall Frye doing was Robert F. Kennedy. (As I recently discovered, that was the one that got him started doing political take-offs!) Frye's RFK was predictably silly and delivered in a rapid-fire barrage of clichéd "Kennedyspeak": "Ahhhh... A lot of people say that I talk like Bugs Bunny and this is not true! Bugs Bunny talks like me! 'What's up, doc?' is my line!" 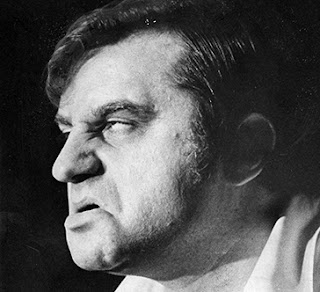 Frye, after having miraculously
"become" Tricky Dick Nixon!
Frye's LBJ and George Wallace -- to list only two notable examples -- were spot-on, but his crowning achievement, and the impression that was widely considered to be the best version by any impressionist, was that of Richard M. Nixon. In fact, when Nixon left office in disgrace in 1974, it apparently put a damper on Frye's meteoric career! Kinda sad, as the man could do so many other celebrities so well.
Along with such varied influences as -- believe it or not -- Pat Paulsen, Shirley MacLaine (long story there), and a 1971 Playboy interview with George M. McGovern, Frye opened my mind to whatever interest I developed in politics as a teen.
If you aren't familiar with the man and his work, you won't understand why his death saddens me so. If you are... I've probably written too much already. Anyway, here's a video Frye himself put together not long ago, apparently (judging from the impressions he does). Unfortunately, it ends rather abruptly.
Thanks for your time.
Posted by The Silver Fox at 12:01 AM 3 comments: 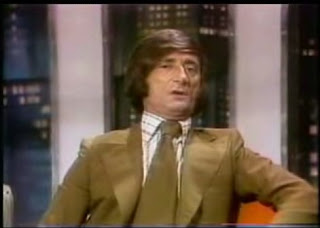 Nothing particularly clever to say tonight, fellow babies. I'm just here to note the passing of comedian Charlie Callas, who just died at the age of 83... or 86. (At this writing -- although it'll probably have been changed 47 times by the time you read this -- Charlie's Wikipedia entry lists both ages!)
Mr. Callas brought me a lot of laughs during (primarily) the early 1970s, when I was a high school student who had virtually no bedtime on any night that wasn't a school night. Without much social life -- hey, I was only in my early teens -- I ended up watching a lot of late-night television programming. Much of that was comprised of old movies, The Dick Cavett Show, and of course, The Tonight Show starring Johnny Carson.
Here's a clip of Charlie from the 1967 Jerry Lewis film, The Big Mouth, wherein Charlie did what he (arguably) did best: Acting like... well... acting like Charlie Callas!
Thanks for your time.
Posted by The Silver Fox at 11:59 PM 6 comments:

I'm not really busy. Or sick. 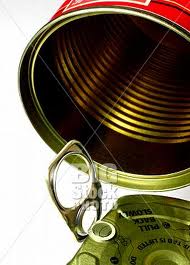 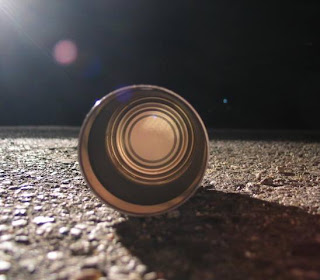 See you when I see you.
Thanks for your time.
Posted by The Silver Fox at 11:15 PM 9 comments: