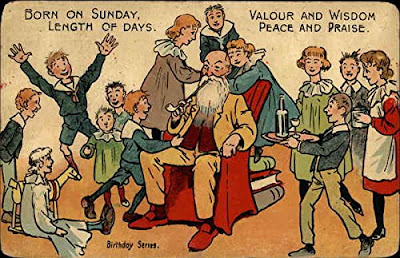 Today's post will be much more personal than I usually get.

On both Facebook and my blog, I often make little observations about growing older. Today's yet another example.

It recently occurred to me that I've known many of my Facebook friends since they were children, although in each case, I myself was already an adult when we met. And I mean those that were little kids, not – for example – customers already in high school when I worked at That's Entertainment in the 1980s.

And of course, I'm not counting any of those whom I met during my own childhood, whether it was in grammar school or high school.

It's kinda scary to think that these little kids are now in their twenties, thirties, forties, or even early fifties! Most have children of their own.

In absolutely no order:

There's the neighbor girl who used to write what were inarguably the world's worst “knock-knock” jokes. She's about to hit thirty years of age and talks as if she's ancient.

And then there's the daughter of a dear friend, a friend who died almost twenty years ago. I still recall when this little girl loved Tigger, but she was absolutely petrified at the thought of Chucky from Child's Play. I assume such is no longer the case.

In the early 1990s, when I had a comic store of my own, one of the customers was a likable young adolescent who was occasionally targeted by bullies. Six or seven years later, he had turned into a tall, burly young gent. I would love to see someone try to push him around now.

When I was in my very first band, the bass player's girlfriend had a younger sister who for all intents and purposes eventually became like a sister to me. I haven't seen her in years, but I still feel the same way about her. I wonder if she still has the “Cranberry Eyes” necklace and the Wayne Newton Christmas LP...

When I was in my mid-twenties, I became close friends with a young lady in her mid-teens. She in turn had a sister of about eight or nine. Over twenty years later, I encountered the eight-year-old, now a strikingly attractive adult. Quite the surprise, once I finally recognized her.

When I sold comic books and other collectibles at the now-defunct Auburn Flea Market, there was an enthusiastic fan of the Teenage Mutant Ninja Turtles who used to rifle through my comic boxes so quickly it made me nervous. Twenty-five years later, she's one of my unofficial “daughters.”

There's a guy whom I used to say I've known since before he was born. IIRC, his mom was waiting in their car, going into labor, while his dad and I were rummaging through a huge collection of Golden Age comic books in someone's home. At least, that's the way I like to remember the story.

Coincidentally, several years later, not one but two of that guy's younger sisters turned out to be friends of my second fiancée's daughter. I saw a lot of both of them as they grew up. Both were bright kids with engaging personalities. And today, they're Facebook friends of mine, too. Talk about a small world.

And that “second fiancée's daughter” I just mentioned? She's still in my life. She's my daughter for all intents and purposes and I couldn't love her more if she were a blood relation. During the last 35+ years we've been through more than even long-winded David would attempt to write about.

Last, but certainly not least, is the daughter of that “daughter.” I first held her when she was only ten hours old, and have since watched her and her husband bring two sons into this world – soon to be joined by a daughter – and plan to be around for as long as I can to watch them grow. Maybe someday, they'll be my Facebook friends, too!

Thanks for your time.
Posted by The Silver Fox at 12:10 PM