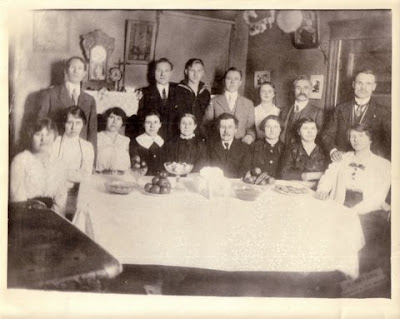 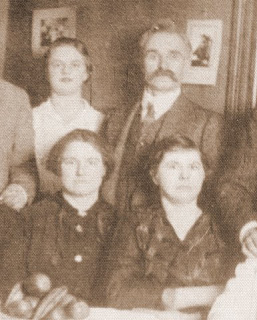 The above two shots are variations of the only photo I have of my grandfather, Peter Stremekes. (I've previously mentioned the multiple spellings I've encountered of their family name, but for right now, I'm sticking with the "Stremekes" spelling listed on my grandparents' 1923 divorce decree.) It's also the only photo I have of my grandmother Josephine until 1927.
There were others that I saw of Peter -- it's hard for me to think of him as anything as personal as "Grampy" because he died so long before I was even born -- while I was growing up. One was a nifty shot on thick card stock which I have yet to find, although I know for certain my mother would never have purposely disposed of it. The others were two or three 8" x 10" shots of him in his coffin, right after he died! In my younger years, even as obsessed as I was with old horror films and the Dark Shadows supernatural soap opera, I thought they were kind of morbid. Perhaps my mom agreed over time, and that's probably why they were eventually discarded.
In the second, cropped version of the photo, my grandfather stands behind his seated wife, my Grammy Josephine. On his immediate right (our left) is my Aunt Josie, an amazing woman whom I regrettably never knew. Josie looks to be anywhere between fifteen and seventeen, which would place the date of this picture somewhere around the time my mother was born in 1917. That would have placed Peter Stremekes in his mid-40s.
(I have no idea who the woman in the lower left of the cropped photo is. For that matter, I don't know any of the others in this group of mostly Lithuanian immigrants and their American-born offspring in this shot for certain, although I think I was once told that the woman sitting on my grandmother's left is her sister Julia, a colorful, charismatic character who'll get one or chapters all her own at a much later date.)
In the interest of my haphazard attempts at displaying these photos somewhat chronologically, I'm going to insert a shot of my Aunt Josie and her younger brother Albert. My Uncle Al was born in 1908, and in this shot, he looks to be between 5-7, which would make Josie a very young teen. It's one of the few childhood photos I have of any of my aunts or uncles -- on my mother's and father's side of the family -- and the only shot I have of my Uncle Al before the mid-1940s! 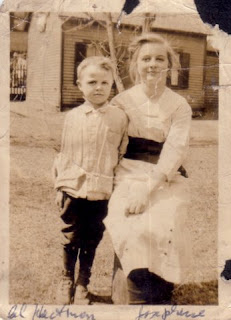 And I'll follow that one with a lovely shot of Josie, taken in (I believe) 1919, when she was an older teen. 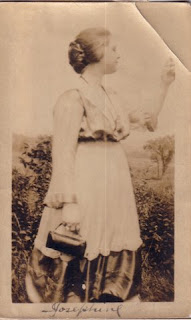 That photo of Josie was probably taken around the time that, for whatever reasons, my grandmother left her husband and seven children when my mom was only two years old. At the moment, I'm not sure if that was before or after her namesake daughter, Josie, got married... although I've been cheerfully nagging my cousin Joe (Josie's son) to find out the date his mom married his dad. I have my own, half-assed theories as to why Grammy might have done her little walk-out, but they'll have to wait until my next Sepia Saturday entry... or perhaps the one after it.
Somewhere around the time of Josie's marriage, the following photo was taken on Newbury Street in Worcester, Massachusetts, in (I think) 1920. These kids look like extras in a Charlie Chaplin flick!
It's labelled "Helen, Anita, & Eddie." I don't know who Helen is or was. Eddie is my much-beloved uncle, about five at the time. By the way, I am firmly convinced that much of my strange sense of humor came from the same gene that inspired Eddie's own... although I'm pretty sure his style of humor was missing my own occasional sick little twists!
And Anita? Anita's my recently-deceased mom, in what seems to be the earliest picture existent of her! It seems to have been taken during the earlier part of the year, which means she had not yet reached her third birthday.
Here's a pensive-looking Aunt Josie relaxing "at home," as the fading, hand-written caption says below her. 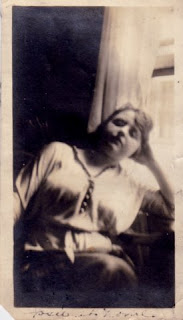 And I thought it only appropriate to insert the next picture of a dapper-looking dude named Joseph Korsak, who married my Aunt Josie somewhere around the time my grandmother fled husband and kids for her new life in Rhode Island. The following photo itself was probably a few years before Josie's and Joe's marriage. My Uncle Joe was yet another of the Lithuanian immigrants in my family, one whose ancestors probably hailed from Russia, originally. 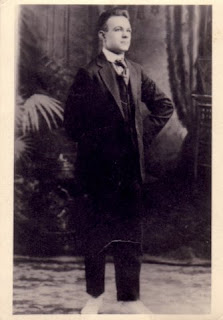 Joe Korsak, Sr., was born in 1895, and according to my cousin Joe, his son and (obviously) namesake, Uncle Joe came to the USA in or about 1914, when he was nineteen. Eventually, as it turned out, he didn't just marry my Aunt Josie...
He married her entire family!
My grandfather, Peter Stremekes -- and I still don't know (yet) exactly when the family began using the name "Hartman" instead, although a piece in the puzzle has recently been supplied by (again) my cousin Joe -- was deserted by his wife, and left to raise most of his children alone. One assumes this was a monumental task, and it very well may have contributed to his death in 1927 at the age of 56 or 57.
At that point, some of my uncles were young adults, and the rest were teens or young adolescents, but the idea of having all of them and my nine-year-old mom fend for themselves was still a few years from being feasible.
Uncle Joe and Aunt Josie took them all into their home. Even with the elder Hartman/Stremekes brothers being old enough for the so-called "work force," that had to have been an incredible burden for Joe Korsak and his wife. No one's alive to say whether the conversation amounted to "Hey, Joe, let's raise my whole family, what do you say?" followed by "Sure, honey, why not?" or if there were countless, sleepless nights of arguments... but the fact remains that they did it.
I'm damned glad that I've never been faced with anything remotely resembling that sort of responsibility! I can just hear myself now: "But, sweetie, I love you, and I married you... not your whole family!"
But... that's just me. I suppose I would have eventually made the "right" decision if confronted with such a choice, but... it'd be easier to say than do.
Joe Korsak did it, and if I give him even the slightest "edge" over Aunt Josie in terms of credit, it's only because these kids were her blood relatives. To Joe, they were "just" in-laws.
I'm incredibly sorry I never met either of them, as they both passed away in 1954, a couple of years before I first saw the light of day. And to me, Joe Korsak will always be a hero -- and I mean that term in its most literal sense -- whose hand I wish I could shake.
Next time, fellow babies, I'll either pompously hypothesize about my Grammy Josephine at length, or share some more shots from my mom's early years.
Thanks for your time.
Posted by The Silver Fox at 8:20 AM