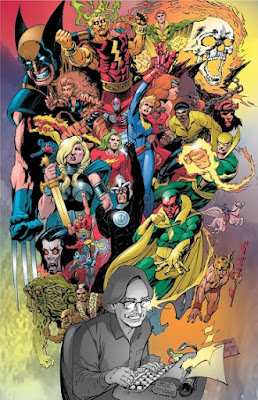 In my previous Comical Wednesday post about last summer's Terrificon 2018, I said "So, there you have it, fellow babies! Three chapters talking about every comic pro I got to talk with at Terrificon 2018. Everybody! Evvvvvvvv'rybody! Ummm... except one..." 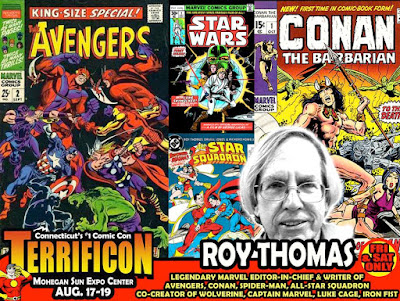 Maybe you recall my earlier account of meeting Roy at Terrificon 2017? Well, just to refresh your memory if you did, in that post, I told how I met artist Jerry Ordway, who drew All-Star Squadron #20, and had him sign it. 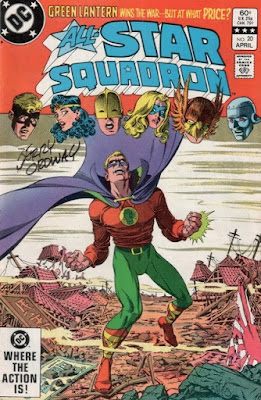 However, although I met the comic's writer, Roy Thomas, later in the day, I didn't even think to have him sign it, even though there was an absolutely perfect spot for him to do so!

For those of you who don't know the name Roy Thomas, here's a relatively brief quote from my earlier post:

Roy was a BNF (Big Name Fan) in the early 1960s, eventually taking over the editorship of the fanzine Alter Ego from another BNF, Jerry Bails. In 1965, he was a school teacher who became a comic book pro and worked for DC Comics for about an hour... Okay, okay, it was really eight days, which isn't much longer. He then went to work at Marvel. His first extended writing job for Marvel was on Sgt. Fury and his Howling Commandos, a title which I read, but admittedly, I didn't immediately notice that the book was being written by someone other than Stan Lee. From there he progressed to another of my favorites, the original X-Men title. He also wrote The Avengers for quite a while. He was the second person to write The Amazing Spider-Man, and the third to write Fantastic Four. He was responsible for Marvel's acquiring the rights to Robert E. Howard's Conan the Barbarian in 1970, which began the "sword and sorcery" trend in comics. Thomas had (and has) a real love for the Golden Age comics he read as a boy -- he often revived or re-imagined Golden Age characters in the titles he wrote -- and he put that love to use in a series called The Invaders, which was set during World War II and featured 1940s Marvel characters such as Captain America (and Bucky), the original Human Torch (and his kid sidekick, named Toro for some unknown reason), and Prince Namor, the Sub-Mariner. In the mid-1970s, Thomas was instrumental in arranging Marvel's comic book adaptation of a new science fiction film... a little something called Star Wars. Roy wrote and Howard Chaykin drew the first six issues, which followed the plot of the movie. And I've left out a lot.

Probably due more to good timing than anything else, the line at Roy's table at Terrificon 2018 was much shorter than the one at Terrificon 2017. The very first book I had him sign of the three I'd brought was – you guessed it – All-Star Squadron #20. And needless to say, he automatically signed it right where I hoped and expected he would! 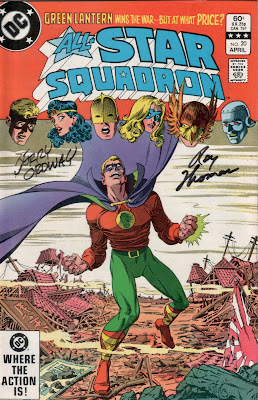 
A few paragraphs back, I mentioned that Roy edited the comic fanzine Alter Ego in the 1960s. Well, in the 1970s, two additional, “professional” issues of Alter Ego appeared, and I'd brought both for Roy to sign. 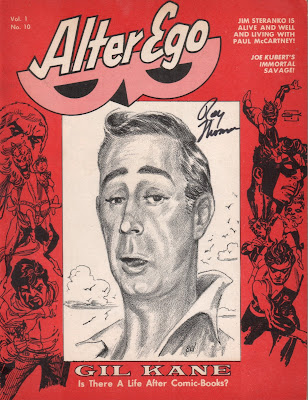 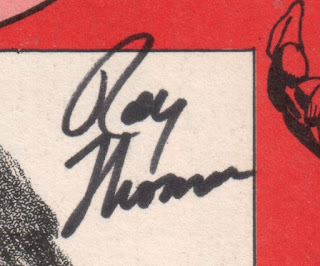 Roy and I briefly discussed the caricature of artist Gil Kane (no relation to Batman co-creator Bob Kane) on the cover of Alter Ego #10. Roy remarked that even though Kane's face in real life was nowhere near that thin, the drawing by the late Marie Severin (1929-2018) was unmistakably that of him.

It was when I handed Roy my copy of Alter Ego #11 that things got... interesting.

The cover of that issue featured yet another Marie Severin caricature, a spot-on sketch of legendary artist Bill Everett, creator of (among many other characters) Prince Namor, the Sub-Mariner. 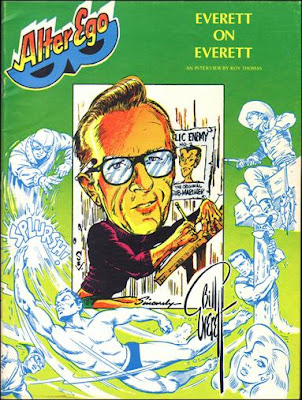 Severin's original sketch (which follows) was redrawn slightly and “framed” by several examples of Everett's own characters, as were drawn by Bill for Alter Ego's long-awaited issue #11. 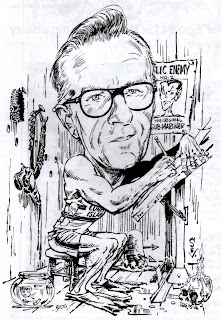 Roy took the book from me, but before he even signed it, he turned to the young guy seated on his right (Roy's friend and manager/agent John Cimino), and said, “This is the one I don't have.”

At first, Roy's attitude was something along the lines of how he didn't want to take my book away from me... but I wasn't having any of that.

Then he offered to buy it from me, and asked how much I wanted for it. I thought Okay, wiseguy, and calmly said “Three thousand dollars.” He knew I was joking, of course, but his eyes grew wide and he rapidly thrust the book back toward me like it was a poisonous snake.

Please keep in mind that this was/is not a rare and/or pricey collectible. A search on eBay will produce up to a dozen copies for auction at prices varying between five and twenty dollars. So it's not like Roy couldn't have found one if he'd made the effort himself. But he hadn't, for whatever reason.

And that was the point.

I told him I didn't want any money from him, and I tried to think of a way to tell him that after having enjoyed his writing for fifty-three years, it would thrill me no end to be able to repay him in even the tiniest of ways. I didn't actually say that, because I realized how corny it would sound even before I'd assembled all the words in my mind.

Finally, Roy told me about a two-volume set of trade paperbacks collecting the “best of” Alter Ego #1-11. These volumes went for about twenty bucks apiece. Roy offered to trade both of those books for my Alter Ego #11. That, I agreed to!

Roy asked for my mailing address, so I wrote it on the front cover of Alter Ego #11, and...

I wrote it on a piece of cardboard handed to me by John Cimino. (John, by the way, writes a blog entitled Hero Envy -- The Blog Adventures. And that's far from all he does!) 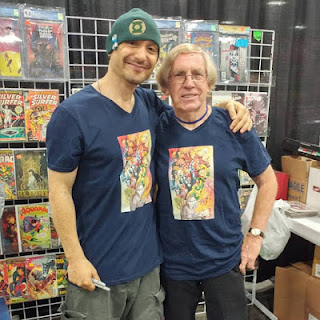 John Cimino and Roy Thomas. (Photo NOT taken at Terrificon.)

But just to be safe, since he was afraid he might lose my address, Roy handed me his personal business card. I'd have scanned that for this post, but I would have had to redact almost all of it. His home address. His email address. His phone number.

Looking at that card in my hand, the eight-year-old comic fan deep inside of me felt like I felt the day I spoke with Jack Kirby on the telephone.

Or the day I visited Dick Ayers at his home. (I'll tell you about that someday soon.)

I received the two books in less than a week. 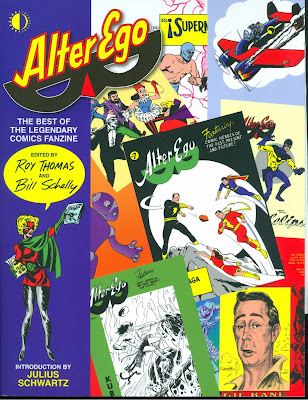 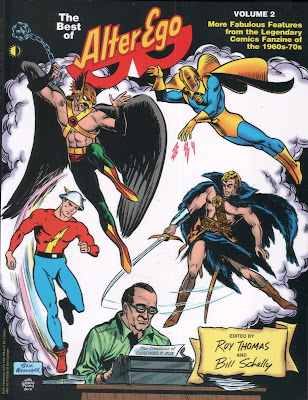 In spite of suddenly having all of this contact info for Roy, I resolved not to make a pest of myself, and, seeing that I'm not eight years old... I haven't. Roy and I have exchanged a handful of emails on several subjects since then, and there is one bit of cool news which I'd dearly love to share with all of you, but I can't... yet.

Anyway, it wasn't until after I left Roy's waiting line that it even occurred to me that while I was doing all this chatting, negotiating, and all-around schmoozing there were probably a slew of people behind me wondering why the hell this white-haired bearded dude dressed in black was spending so much time talking to Roy Thomas. And usually, I sympathize with such people and try to make my own "business" brief.

Thanks for your time, fellow babies.

P.S. ~~ COMING SOON! (Watch for it!) A Re-Posting of One of the Best (and Longest) Stories I Ever Posted on This Blog!
Posted by The Silver Fox at 9:00 PM