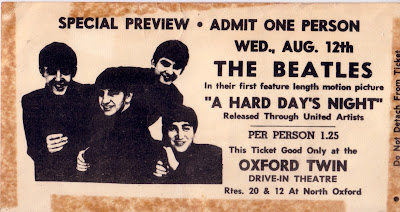 1. If I were stranded on a deserted island with only five LPs...

2. (Reprinted from 11/30/09) I was seven years old when the Beatles and their music made their big splash on American soil. (A "splash" on "soil?" Am I mixing metaphors there?) Therefore, while the teenage girls mostly chose -- "chose" meaning "had the hots for" -- Paul or John, my favorite Beatle was the comical, goofy Ringo. That changed as the years went by and I entered my so-called adulthood. George became my favorite. For some reason, I identified more with the spiritual, so-called "quiet Beatle" more than the others. (And to anyone who read that and said "You identified with somebody described as spiritual and quiet?"... leave the room, wiseguy.)

Although I was shocked and saddened at the fatal shooting of John Lennon in 1980, it was Harrison's 2001 death that had a more profound effect on me. Something about the youngest Beatle dying of lung cancer, a disease more associated with older people -- and yes, of course I realize that cancer far too often claims the lives of young adults, and even children -- forced me to face my own mortality.

3. My sister bought all the USA versions of the Beatles albums up to and including "Revolver" but lost interest in their music as they entered their more psychedelic phase. Accordingly, my interest in the Beatles is much more prominently focused on their earlier stuff.

4. One day, I was sitting on the floor of Kathy's bedroom while she played "Meet The Beatles!" I was singing along with "All My Loving." Suddenly, my sister started yelling at me, although I don 't remember what she was saying. I didn't care. I was engrossed in the music. Our mom came in, asking what the problem was, and my sister exclaimed "He's singing it wrong!" My mother listened to me for a few moments, then calmly told Kathy "He's singing the harmonies!"

From the start of my own personal Beatlemania, I was confused -- in a good way, actually -- by the Beatles' harmonies. They were well-constructed and stood out to the point where the young Fox wasn't always sure what vocal parts were harmonies, and what parts were the actual melody. I still marvel at songs like "She Loves You," where John and Paul sing/yell "Woooo!" in two-part harmony. Years later, I wrote a rockabilly song called "Because You Lied" for my second band, Viper, and "borrowed" a harmony from the Beatles' "Tell Me Why." To his credit, our keyboard player Sid smiled and recognized the tribute immediately.

5. At seven (then eight, then nine...), I had no sense of musical history. A lot of songs which the Beatles covered on their early albums were originally done by artists like Chuck Berry, Carl Perkins, the Cookies, the Shirelles, Buck Owens, Larry Williams, and others. (Most so-called "British Invasion" groups did that during the '60s.) I didn't learn that until years later.

6. I sang "Back in the USSR" in my first band, Shudr. I didn't really care for that song, though. In my second band, the aforementioned Viper, I helped the other band members combine four or five Beatles tunes into a medley. The crowds loved it!

7. One night, my friend and writing partner Skip and I were at a nightclub where his boss' son was performing in a jazz band. When the band learned that I was a singer, they invited me up on stage for a few numbers. One of the songs they asked if I knew was "Slow Down," Larry Williams' 1956 r&b tune which the Beatles had redone six years later. I sang it as close as I could to how John Lennon had sung it. Of course, it did strike me as odd that a jazz band would do a rhythm and blues song, but hey...

8.  (Reprinted from 5/21/08) I love it when an article talks about "the surviving members of The Beatles," like there are three or four dozen of them floating around the planet. Folks, there are two surviving members. Half the group. Period. There were four in the real core group -- John, Paul, George, and Ringo -- and that's not trying to insult Pete Best, or Stu Sutcliffe, or any of the people who've variously been referred to as "the fifth Beatle" someplace because of their amazing contribution where blah-blah-freakin'-blah was concerned...

And no, no fair counting Yoko.

Let's face it, if you were one of The Beatles, you were one of the coolest people in the universe, ever. Or at least you were cool for a period long enough so that you'll be indelibly stamped in the minds of Earth's citizens as a "former Beatle," and nothing you can do -- not even a stint as Mr. Conductor -- can take that away from you.

I mean, if Paul McCartney -- I'm sorry, I meant Sir Paul McCartney -- were to be elected Prime Minister of Great Britain, you just know that even if he were assassinated in office we'd read this: "British Prime Minister and former Beatle Sir Paul McCartney was shot today outside of... " Hell, Ringo could become an astronaut and a serial killer, and the eventual news article would read, "Ringo Starr, former Beatle, astronaut, and accused mass murderer, was apprehended today... "


9. Something really cool I recently found online. It's almost half an hour long, so it's not for everyone, but if you're a serious Beatles fan, you ought to like it.

Thanks for your time!