It's NOT About the Mushrooms... (A Clarification) 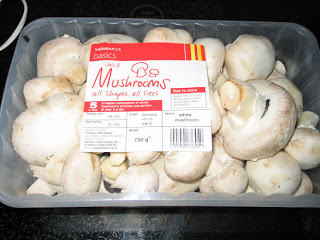 Okay, after reading a couple of comments and a couple of private emails reacting to my last post, I think I've confused some of you. My illustration -- well, Andy Warhol's, actually -- of a can of Campbell's Cream of Mushroom Soup was meant to serve as a friendly warning to my readers that I may not be blogging often in the immediate future. I stated that I have a very hectic personal schedule, and also mentioned that I've been sick lately.
But the soup image and the sickness are totally unrelated. I have been eating lots of soup as I've tried to fight off this latest ailment, but it has not been cream of mushroom soup. It's been mostly chicken soup. And spicy soups. And spicy chicken soups. If I'd had more energy, I would have made some from my own private recipe, under the assumption that that would indeed have cured me! (Someday, remind me to tell you about my own homemade chicken soup.)
But not cream of mushroom.
Why the cream of mushroom image, then?
The Campbell's Cream of Mushroom Soup "signal" belongs to writer Mark Evanier, author of two highly-recommended websites, POVonline and NewsFromME. (I visit his blog almost every day, at least once.) It's basically a "long-standing internet tradition" that Mr. Evanier himself began! To quote from Mark: [A] can of Campbell's Cream of Mushroom Soup is a universal symbol. It says, clear as day: "The proprietor of this website is swamped with pressing deadlines for the next few days so don't feel abandoned or otherwise neglected if he doesn't post much for a while, or if he's been rude as rude can be about not answering your wonderful, informative e-mail. He will get to both this weblog and his e-mailbox as soon as is humanly possible." Take no umbrage, lose no faith in mankind.
I use (and always credit) Mark's idea whenever I foresee gaps in my own blogging schedule for any reason(s), not just writing deadlines. I'm just trying to spread the word, so in addition to his eight million or so readers, I personally can increase the world's awareness of his "tradition" by, like, forty-seven more people.
As for why that's the image he chose... ask Mark. Not me.
So, again. There are several reasons why I don't plan to blog much at all for the next few days. Not just because I'm sick.
Th-th-th-that's all (for now), folks!
Thanks for your time.
Posted by The Silver Fox at 10:22 AM