Don't worry, I'll explain the above notation later in this post!

As I warned you last time, the stories-within-a-story comprising my five posts about TerrifiCon 2019 will not be in chronological order. Instead, the various anecdotes will be arranged to suit my own idiosyncratic narrative style. 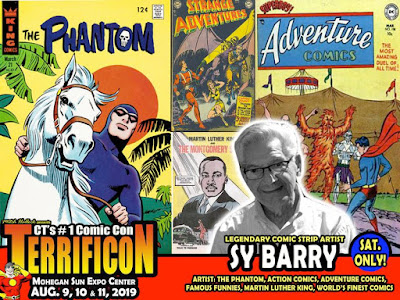 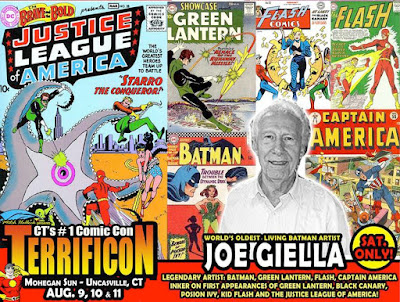 It's a pretty good guess that the two oldest comic pros at the con were Sy Barry and Joe Giella, both of whom are ninety-one years old. Both were pencilers and inkers who were better known as inkers. Both worked for both Timely Comics and DC Comics during their careers. They both worked on comic strips as well as comic books.

Joe Giella is probably best known for inking the Flash, Green Lantern, and Batman. But during his long career, he also assisted both Barry brothers on their respective strips.

Fittingly enough, Sy Barry's table was next to Joe Giella's. I approached Mr. Barry first, holding a copy of King Comics' The Phantom #22. It was the first and only comic featuring that hero which I'd owed in my youth, although the copy I own today is not that same one. Mr. Barry carefully flipped through the issue, commenting that the penciled and inked art on the inside of the book was not by him, but was by another artist (Bill Lignante, according to Grand Comics Database).

I nervously asked him if he had at least drawn the cover. He had. That was good enough for me to have him sign it, of course. Minor catastrophe averted. 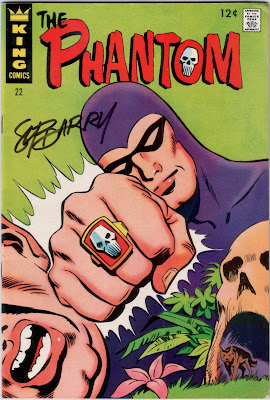 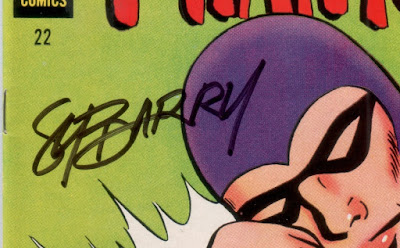 Next was Joe Giella's turn. Last year, at TerrifiCon 2018, I'd had him sign three different comics. One of those was the first and only Flash Annual from the Silver Age. This year I brought another Silver Age issue from that series, The Flash #145. This was my first exposure to a villain called the Weather Wizard, one of my childhood favorites from the Flash's fabled "Rogues Gallery" of villains. 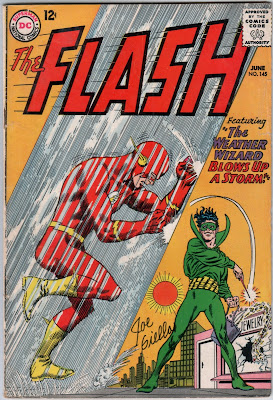 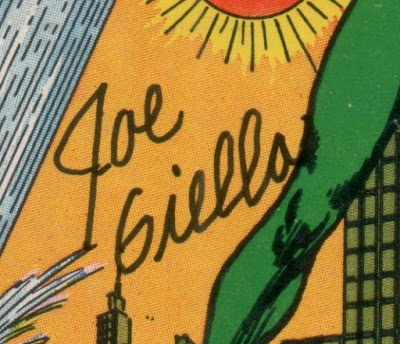 The next book I gave Joe to sign was Green Lantern #26, the second appearance of the villainess Star Sapphire. It seemed only fair to bring this particular comic, since last year I'd had Joe sign Green Lantern #16, her very first appearance! 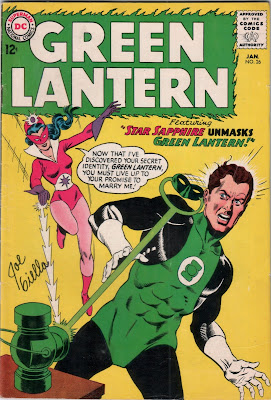 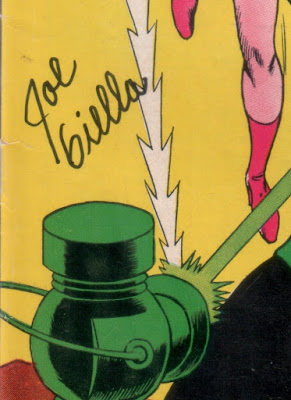 Finally, a real treat... for me! In the mid-1960s, the success of the Batman TV show goosed the popularity of superhero titles, and that ABC-TV program is generally given credit for the proliferation of guys and gals running around in tights for the next couple of years in the world of comic publishing.

But shortly before that TV show premiered, the Archie Comics Group revived several of its superheroes from the early 1940s. Most of these characters banded together as a group called The Mighty Crusaders. Bluntly put, the art by Paul Reinman in issue #1 of The Mighty Crusaders was just okay, and the stories by Jerry Siegel (Yes, the same Jerry Siegel who had co-created Superman roughly thirty years earlier!) weren't all that great, either. But I was nine years old, and hardly a discerning critic.

Anyway, as I learned shortly before the convention, much of The Mighty Crusaders #1 was inked by Joe Giella! And although I was aware of the fact that he'd worked for many different publishers during his long career, I had been under the assumption that his 1960s work was all for DC. So, my secret is out. I don't know everything. 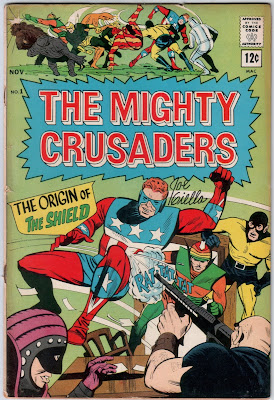 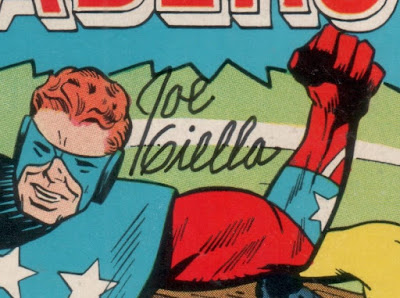 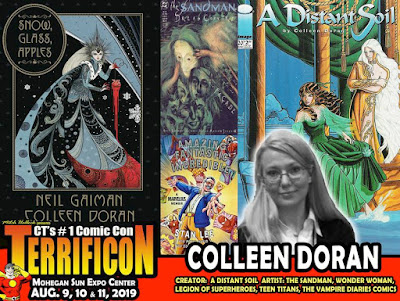 Another guest at TerrifiCon 2019 was Colleen Doran, who first came to prominence as the creator/writer/artist of A Distant Soil. But listing only that among all her other credits is like saying Stan Lee wrote Fantastic Four. Well yeah, sure, but...!

I brought only one comic for Colleen to sign, a stand-alone Sandman issue written by Neil Gaiman which tied up a loose end from DC's Silver Age. (In fact, it's one of the books pictured above in Colleen's TerrifiCon photo collage.) And when she asked if I wanted it personalized to me, I said yes. I generally don't ask for someone to include my name with their signature (to save them time), but if they offer, I always say yes. That shows them I don't intend to turn around and sell my signed item. 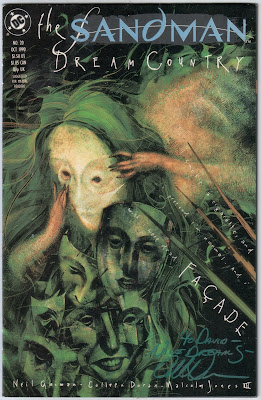 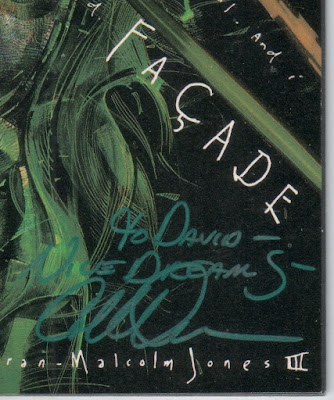 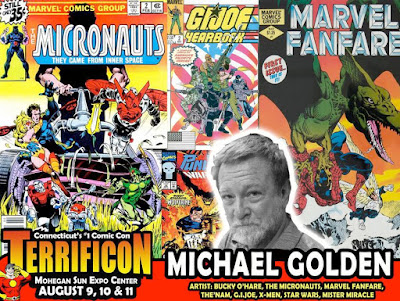 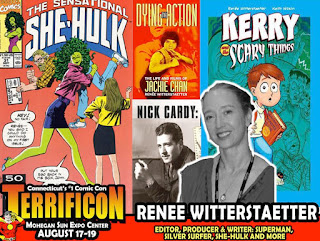 Over the years, I've owned, read, and enjoyed a lot of comics by Michael Golden, but the only comic I could think of which is currently in my collection is the 1984 Batman Special #1, featuring a great story pitting Batman against a villain called The Wrath. The Wrath was a villain whose origin and m.o. was similar to Batman's, except his career was devoted to killing lawman instead of capturing criminals. Fascinating story written by Mike W. Barr, but boy am I getting sidetracked here!

Before I got to speak with Mr. Golden, I got to talk with Renee Witterstaetter, who is evidently Mike's manager. However, as you can see if you read what's listed under her photo above, Renee's credentials in comics (and elsewhere) involve quite a bit more than being someone's manager.

After asking her what Golden charged for signatures, I couldn't resist telling her that I already had hers.

To make a long story short -- well, as much as I can ever accomplish that -- in 1994, Dick Ayers (Yes, that Dick Ayers!) and I submitted an original comic concept to Ms. Witterstaetter, who was then an editor in Topps' relatively-short-lived comic book division. Her initial enthusiasm and desire to see more from us was unfortunately curtailed by Topps' unexpected decision to stop buying new concepts.

When  I told her all this (in much greater detail, me being me), she began to apologize, but I ended up telling her the apology was unnecessary because 1) it wasn't her fault, ultimately, and 2) being a comics pro is like being a professional actor. If you can't take rejection, you have no business being in that line of work.

So that explains the illustration at the very top of this post.

And oh, before I forget! I actually did get my Batman Special signed. 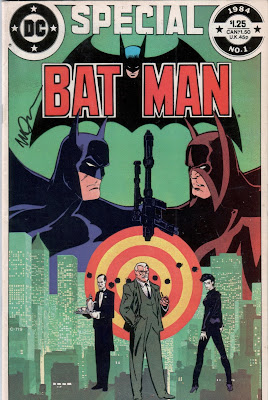 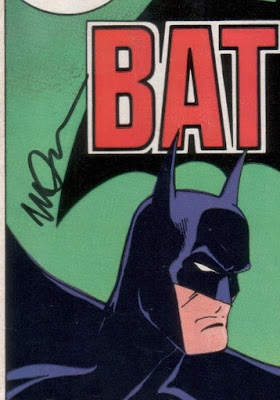 And thanks for your time.
Posted by The Silver Fox at 5:56 PM