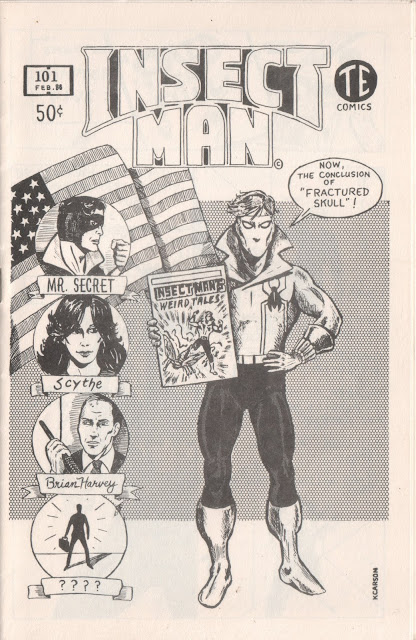 After having written the demises of the Baron and the Mummy in Insect Man's Weird Tales #100,  I devoted most of issue #101 to Insect Man's final battle with the Bat, and how the forces of Counter-SKULL made desperate plans to vacate SKULL Island.

All the way back in Larry Young's Insect Man story in issue #88, two SKULL agents named Penrose and Winston were mentioned. I later used their names in issue #95 (my first Insect Man story), in a flashback sequence. So I figured I'd finally show 'em -- and kill 'em off -- along with all the other people I so gleefully wiped out in the "Fractured SKULL" story.

So... In Chapter Five, penciled by Holly Basiner and inked/lettered by Ken Carson, Brian Harvey dispatched one of them, as the baddie sneaked* up behind him... 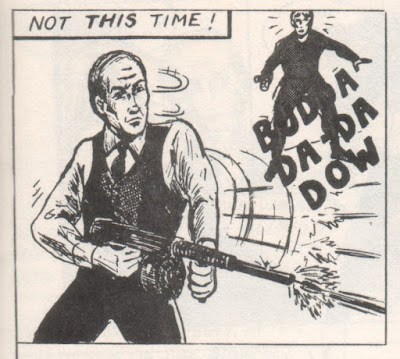 Ken Carson actually complimented me on that "budda-da-da-dow" sound effect,
assuming I'd subtly made references to Buddhism, Dadaism, and Daoism! I
replied quite honestly, "Actually... I just thought it was a really cool sound effect!"

...and Mr. Secret, wielding a shield a la Captain America, broke the neck of the other.

Now. In the first paragraph of today's post, I said that "the forces of Counter-SKULL made desperate plans to vacate SKULL Island." Why were they in such a rush? Heh. Y'see, last issue, during Mr. Secret's flaming fistfight with the Mummy in the latter's second-floor office, the floor was severely weakened by the flames. This allowed the Mummy's computer -- a huge contraption that was probably a relic of SKULL's earlier days during the 1960s and 1970s -- to crash through the floor, and continue falling completely through the foundation of the building itself, and beyond! As is explained in this issue, SKULL Island was actually a dormant volcano in the middle of the Atlantic Ocean, and as (bad) luck would have it, the giant computer somehow reactivated said volcano. (Okay, okay, maybe my science was a bit shaky, but nobody's perfect.)

At this point, the lovely-and-lethal Scythe showed up, telling Greg and Brian all that fun stuff about the "reactivated volcano." She also told them 1) the island was probably going to erupt in about twenty minutes, 2) they shouldn't worry about her, because she had her own way of escaping, and 3) Brian really needed to get Greg to a medic, due to his horribly-burned arm!

Of course, Brian and Mr. Secret decided to find Rex "Insect Man" Mason before fleeing the impending explosion. That was a great idea, until... 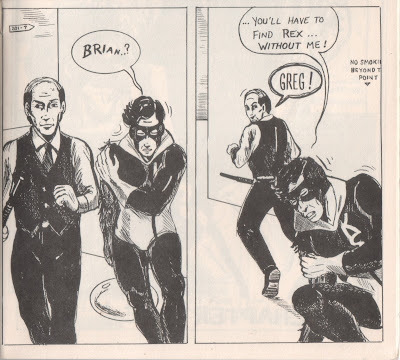 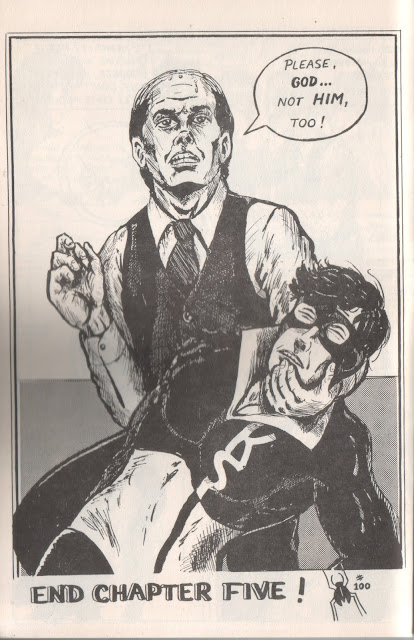 Notice the "#100" after "End Chapter Five!" That was the original destination for this
chapter, remember? You'll see a similar notation at the beginning of Chapter Six, below!


Cut to Larry Young's penciling/inking/lettering in Chapter Six. Insect Man is chasing the Bat down a long hallway, where he (Rex) finds a discarded rifle. 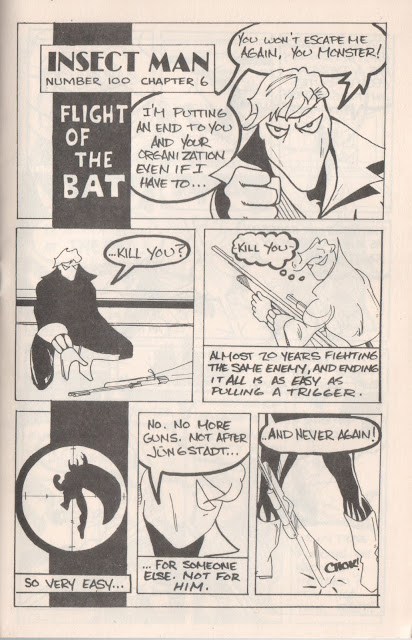 After using his insect powers to catch up to the Bat, Rex begins one of those comic book fights in which long-ass speeches accompany fisticuffs! This can be done only in comic books. Don't try this at home, kids! 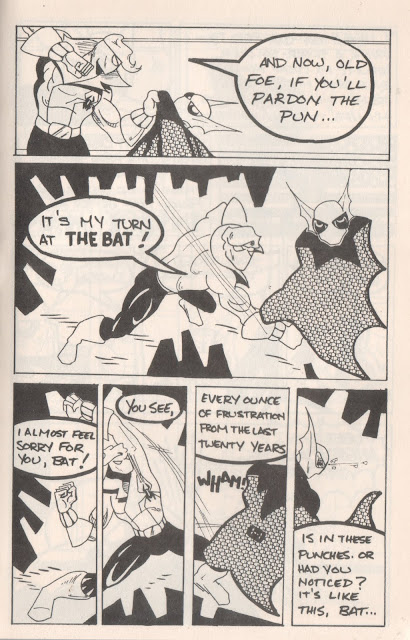 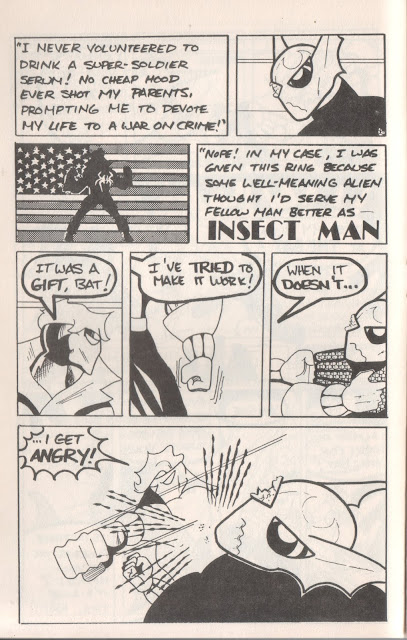 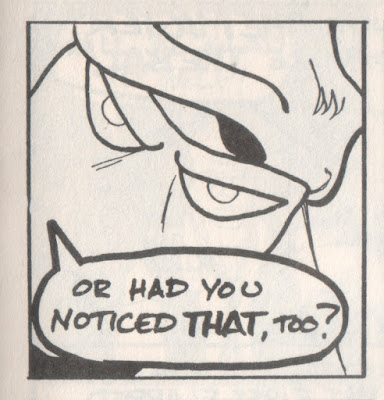 Rex unmasks the Bat, revealing him to be the brother of Hur-Bi, the alien who gave Rex the Insect Man ring twenty years earlier. (That family connection no doubt has something to do with how Hur-Bi gave Rex the paper which contained the location of SKULL Island, ya think?) But since Larry Young's depiction of the unmasked Kur-Bi (yes, yes, named after comic legend Jack Kirby) looked very little like the Hur-Bi drawn by Ken Carson in issue #97, I had to explicitly mention the family ties in Chapter Seven's dialog, just to make it perfectly clear to the reader!

At this point, Brian Harvey shows up, telling Insect Man that they need to get off the freakin' island before approximately eight more minutes elapse! While Rex is distracted, however, the bruised, bloody, and otherwise disheveled Kur-Bi vanishes by teleporting through the wall.

Kur-Bi thought he was safe. Too bad he was the mercy of a bloodthirsty writer, namely me! 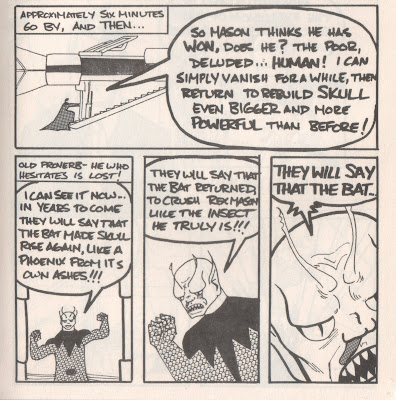 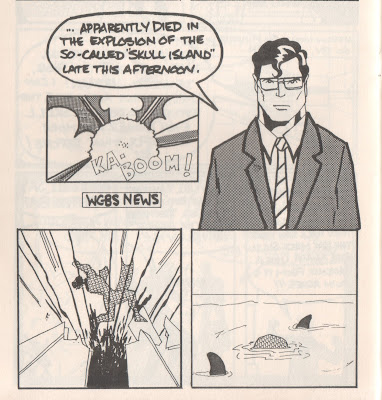 Using Clark Kent as the TV anchorman was Larry Young's idea. And I loved it!


Chapter Seven was penciled, inked, and lettered by Holly Basiner.

Over the next few weeks, CounterSKULL disbanded. Insect Man showed up to pick up his final check, and ran into Greg Nile. Greg's badly burned arm had been amputated. 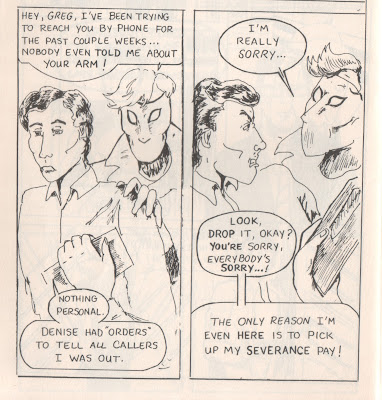 These stories truly were products of the 1980s. I put "orders" in quotes to show that Greg didn't
really boss his wife around. I musta been watching Donahue at my fiancée's house when I wrote this! 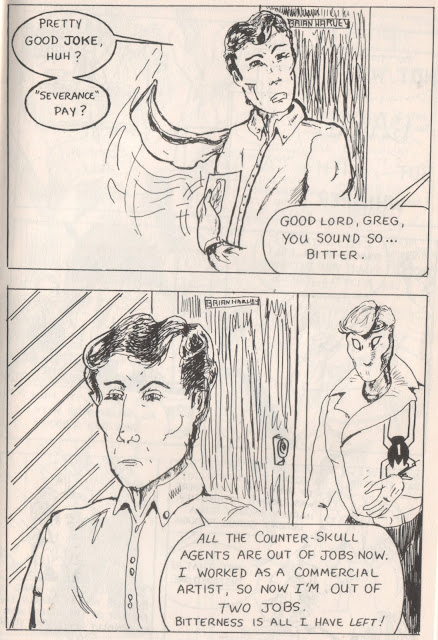 Ah, yes! I remember Paul Howley's reaction to the shot of Greg Nile
flipping his empty sleeve as if it were yesterday: "That's gross!"


I didn't ever want anybody to bring the Bat back, so I established that they found his dead body, partially eaten by sharks (see Larry Young's illustration above). Y'see, fellow babies, in comic books, if you don't see the body, it usually means that a hero or villain is not dead. And sometimes, even if you do see it, they come back anyway. But I digress..

Good ol' "Yer-damned-right-I-hold-a-grudge" Rex ends up throwing Jüngstadt in Brian Harvey's face for the umpteenth time, talking about the former superhero called the Hornet, who died on that fateful day eleven years earlier. Rex admits that he didn't even know the Hornet's real name, taunting Brian by assuming Brian didn't know it, either. (Kind of a dumb assumption. As the head of Counter-SKULL, Brian Harvey would have known all his top agents' nammeds, right? Oh, well...)

Brian corrects him. As it turns out, the Hornet's real name was Thomas Harvey. Yep, Brian's younger brother. Oops.

Rex realizes -- finally -- that the tragic loss of all those Counter-SKULL agents years earlier wasn't Brian's fault. It wasn't Rex's fault, either. It was nobody's "fault." Thus is the proverbial stick removed from Rex's forty-year-old butt, and he and Brian are on good terms again, at last.

One more page remained in issue #101. It took place at a bus station in Worcester, Massachusetts. Once again, my favorite collaborator (a/k/a Ken Carson) penciled, inked, and lettered it! 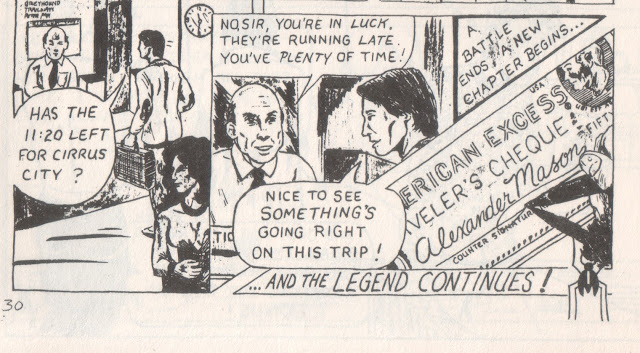 *You can use "snuck" instead of "sneaked" if you want to. I never will.

Insect Man, Insect Man's Weird Tales, and all related characters and titles are copyright © Paul B. Howley.
Scythe is copyright © Holly Basiner and Frank Hunt.
Posted by The Silver Fox at 7:00 PM