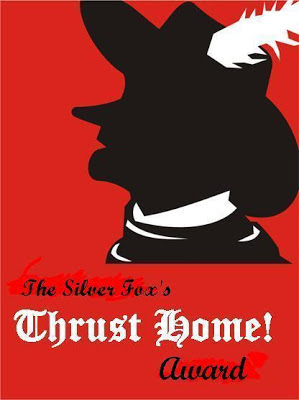 Award drawn and "donated" by Skip Simpson,
based on a poster he found on the internet.

First, here's the obligatory reminder as to what "The Silver Fox's THRUST HOME Award!" is all about:

Bloggers like to give each other awards. One of the drawbacks to these awards is that they're usually given with a set of conditions. Quite often, one of these conditions is that the awardee must first jump through a few select hoops, and then "pass on" the award to a pre-ordained number of other bloggers, which has the unfortunate effect of turning the award itself into more of an internet chain letter than a true honor.

In response to this, I created my own blasted award.

One of my all-time favorite stories is Edmond Rostand's Cyrano de Bergerac. Cyrano often used the expression "Thrust home!" when fatally piercing an opponent during a sword fight. I've appropriated that phrase for... "The Silver Fox's THRUST HOME Award! -- Given to the Author of a Single Outstanding Blog Post."

And my rules for the award -- and the rules for its recipients -- are:


As Bish herself says at the beginning of her post, she doesn't use her blog to be political (as I also say on my own blog). But her article does briefly touch on a fact that I've seen reported elsewhere (including here) which is that since the USA's 2016 election, numerous people feel totally justified in showing themselves to be bigoted morons. ("Bigoted morons," by the way, are my words, and not Bish's.) Anyway, never mind what I have to say this time around. Just click on the above link and read Bish's award-winning post.

And thanks for your time.