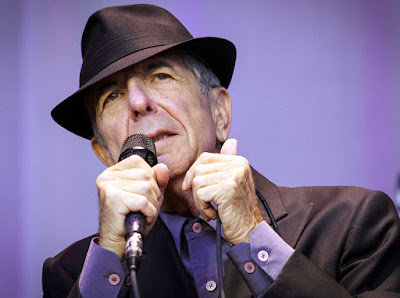 Those of you who know me well probably think it's odd that I should be posting about Leonard Cohen 's death a few days after the fact. After all, I usually post a tribute to a celebrity within twenty-four hours of when I hear of his or her passing.

Well, instead of my usual type of tribute, in Mr. Cohen's case, I'm going to do something different.  I used the lyrics to one of his songs in a four-parter I wrote during the early days of this blog. I'm going to republish that story starting tomorrow, continuing through Friday, Monday, and the following Wednesday. I hope you come here  for all of it.

And as far as Mr. Cohen? We can still count on hearing his great song, "Hallelujah," whenever movies or TV have a dramatic moment....