OHO! (prequel to "The Reunion of the Super Pets")

After the last few weeks, I had to do something to lighten up this blog. And this is it, fellow babies!

The Genesis of OHO

Roughly a thousand years ago -- or, to put it another way, in the early 1970s -- I was a high school student who contributed occasional stories, articles, and a comic strip called "Doodles Dumbluck" to a strange publication which Massachusett's Oxford High School inexplicably called "The Ledger." I say "inexplicably" because when I think of a ledger, I think of bookkeeping, accounting, etc., and The Ledger was called our high school's newspaper... albeit a newspaper which was -- at least until well after I'd joined the staff -- printed in the form of a stapled booklet rather than a "proper" newspaper. 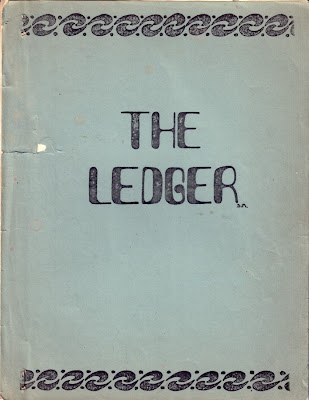 (In all fairness to the concept of using The Ledger as the title of a newspaper, the very first entry when doing a Google search for "ledger" is a newspaper called The Ledger in Lakeland, Florida. But I digress.)

Anyway, due to the fact that there were several weeks -- or even months -- between issues, The Ledger wasn't much of a newspaper, but it tried. Or rather, its staff did. But there were a lot of filler pieces, like the stories and comic strips I mentioned, and a lot of bad poetry.

Somewhere about this time, the thought occurred to yours truly that what Oxford High School really needed was a newspaper that was a little more.... subversive? An underground newspaper, something that wouldn't be controlled by the Powers-That-Be.

Anyway, I decided that I would gather a handful of like-minded upstarts and anonymously publish an underground newspaper called the Oxford High Oracle. (Notice, if you will, that the word "the" is not officially part of the title.)

As I was planning this radical little scandal sheet, I decided that I should have an editorial pseudonym. I created a David'Z RantZ-ish mascot of sorts, a disgruntled entity whose name -- OHO (all caps!) -- came from the initials of the proposed publication itself. OHO would be a little-seen, cartoony figure. Then, as now, I wasn't much of an artist, so I gave OHO a visual design which even I could handle.

The following one-page origin sequence was neither written nor drawn during my high school years. It was done circa 1986-1987. I'll explain why later in this post. (Right-click on the illustration to open a larger version in a new tab or window, please!) 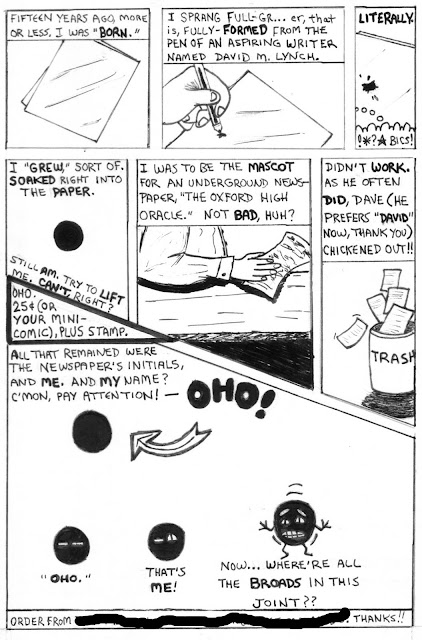 And I did not chicken out! Little bastard. OHO also added a "the" to Oxford High Oracle's title. Jerk.

For once, I can rightfully blame others for the fact that the newspaper never saw the light of day. If my memory serves me correctly, the only one of my friends & friendly acquaintances who had the time and/or inclination and/or guts to contribute was my best friend, Kevin.

And I sure as hell wasn't going to attempt such a monumental undertaking with so few kindred spirits.

So, Oxford High Oracle lay stillborn. And the above origin story implies that I was "stuck" using the OHO character over the years, but that's not exactly true, either. I not only didn't use him until 1986, but I really didn't even think of him again during the intervening years!

The Return of OHO

In the mid-to-late to 1980s -- that's right, during my stint at the Eisner-Award-winning collectibles shop That's Entertainment -- I was briefly involved with a cresting fad called "small press comic books," a/k/a "mini-comics." These were tiny, self-published, photocopied comics -- not exactly fanzines -- written, drawn, and sold (mostly by mail) by people who just plain loved comics and had neither desire nor hope whatsoever of making any real money from their efforts. It was something one would do for fun, and in most cases, camaraderie with other mini-comic creators. (I actually attended a comic convention in Boston, where about a dozen of us small press "publishers" chipped in and rented a space to sell and promote our "wares.")

If you know that song and its classic beginning, I defy you to read the first page of Mayer's magnificent mini -- or my reproduction of the opening sound effects, which follow -- and not hear the tune in your subconscious while his stick figure character plunks out:

Mayer also described the time when, as workers in a grocery store, he and a friend or two each grabbed large canisters of Instant Quaker Oatmeal from the shelf and formed a conga line, playing the "Quaker Oatmeal Conga" on their makeshift drums!

Picture it. Two or three stockboys, dancing while chanting:

As I said above, twisted and brilliant.

I also sent away for a mini-comic -- I can't recall the name right now -- written by a guy named Chuck Bunker (who also wrote and drew a really cool title called Geriatricman) and drawn by a fellow named Ted Bolman. Assuming I was contacting the artist, I called him "Ted," and he sent me a letter along with the comic which began "I'm not Ted Bolman." This led to a short-lived series of lame jokes where, as in Silver Age DC Comics, I made remarks to the effect of "How do I know you and Ted Bolman aren't the same person? I've never seen both of you in the same room at the same time." (See, the idea was, I'd never actually met either of them, and... never mind.) And when they both attended the Boston convention which I mentioned earlier, I took the joke one step further and -- again, as in early 1960s DC Comics -- said "How do I know one of you isn't really Alfred the butler, in disguise?"

Look, you hadda be there, okay?

But I'm getting ahead of myself. The convention came after I had produced my own mini-comic.

So, backtracking a bit... I wanted "in" on this phenomenon. True, I couldn't draw, but in this format, that wouldn't be an issue!

But what would my comic be about?

At this time (1986), I was already writing the Insect Man title for That's Entertainment -- a title which was arguably the oldest "small press" comic still being published at that time, albeit with quite a hiatus between its original incarnation and that of the 1980s -- and I was about to join the ranks of the professionals with the publication of The Man from U.N.C.L.E. #1 in January of the following year (1987, natch!).

I couldn't use the Insect Man character even if I'd wanted to try my hand at drawing him; he wasn't mine. Add to that the fact that I didn't want to do any serious concept(s) of my own which I may have had in my mind, in this virtually-unpaid format.

Then I remembered OHO, who was basically a throwaway charcter anyway... although one which I actually hadn't thrown away!

It's engraved in stone somewhere. Or at least, it should be:

So here, without further ado...

(Wait a second! Screw that. This is Yours Truly we're dealing with here!)

So here, with further ado...

In other words, here are some random notes before you get stuck reading I serve up this little gem:

So, without further ado: OHO #1-and-only! 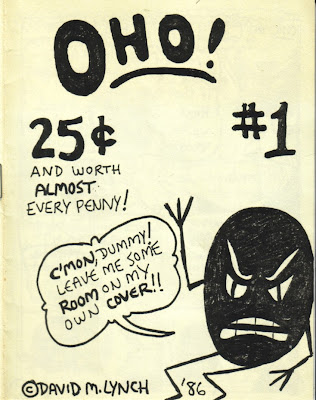 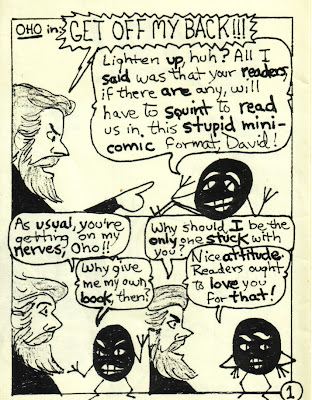 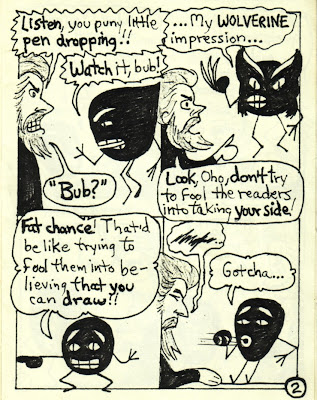 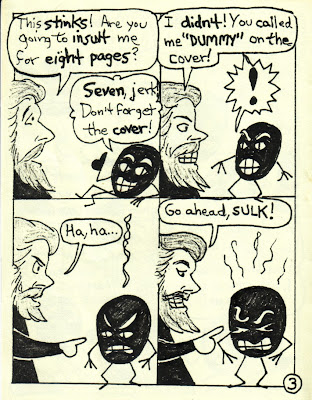 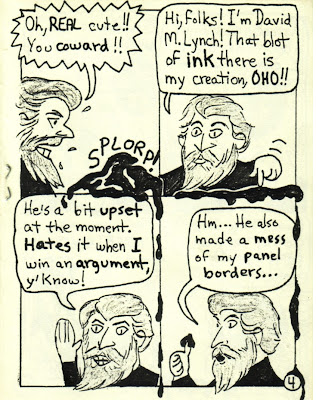 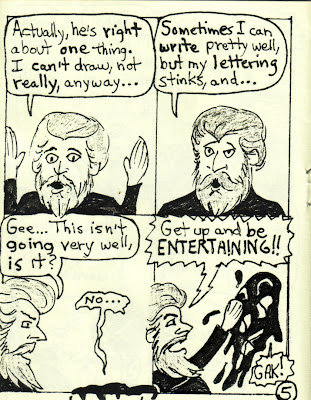 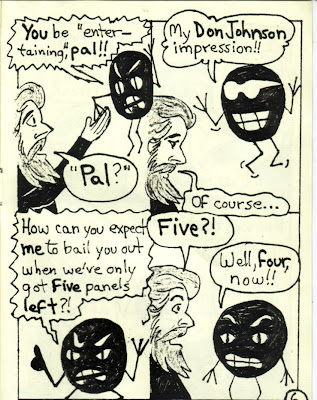 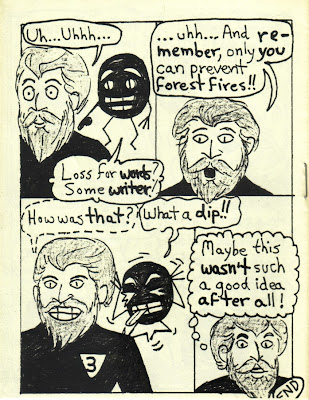 So. I was officially a small press publisher.

There never was an OHO #2. I never really intended for there to be a second issue, although I did submit a couple of illustrations of OHO here and there, as well as prepare that one-page "origin" story, which was supposed to appear in a small press anthology which never happened. As it turned out, for one reason or another, I soon lost interest in the whole "small press explosion," as the whole fad was referred to at the time.

The next time I used OHO, he was a mascot once more, in the early 1990s. I had left That's Entertainment on amicable terms in 1988, and not long after had started a new & used comic book business called Yesterday & Today at a flea market. The business briefly supported a store, although I ran the store and the Sunday flea market stand simultaneously. Several flyers and of course, the store sign itself, featured OHO.

Not long after the store closed, I eventually got out of the new comic side of things, and by the early years of this century, I'd pretty much gotten the "business" part of the "comic book business" out of my system entirely.

There was never an official date upon which OHO had outlived his usefullness, but his "demise," as it were, came well before I closed up shop at the flea market.

In 1988, OHO was involved in a major fanzine project of mine, and that's what you'll be reading about next week! (UPDATE: For reasons I won't get into here, the follow-up to this post never appeared. Sorry.)

See you then, I hope.

But until then... Last, but not least, a little "bonus" for you:

Here's my ages-old rendering of OHO doing an "impression" of Rorschach, from the then-more-or-less-current DC series, Watchmen! (And ya gotta love the timing, considering that the Watchmen flick will soon be hitting the theatres!) 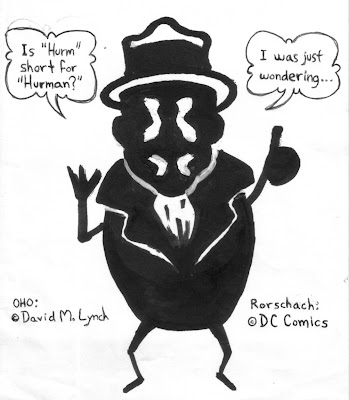 Thanks for your time!
Posted by The Silver Fox at 7:00 AM