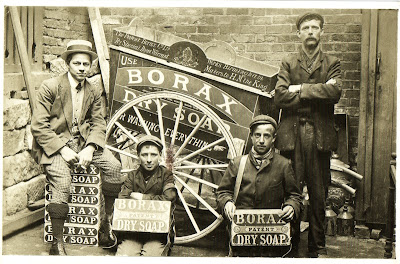 Alan Burnett, world-renowned author -- Hey, he's British, and I've heard of him! -- of the always-entertaining News from Nowhere  blog, is nothing if not a chivalrous sort. Therefore, in his recent post entitled "Twitter for Gentlemen" -- wherein he extolled the virtues of the quaintly-archaic postcard as an alternative to the high-tech Twitter -- I assume he meant to include the fairer sex as well. (UPDATE: Since this writing, Alan has altered the name of this noble endeavor to "Twitter for Gentlefolk!")
But this is between "us guys."
I've received Alan's contribution (shown above) to the two-way "postcard swap" between Alan and myself, arranged secretly in the dead of night after I took him up on the all-encompassing offer in his above-mentioned post. And being the procrastinating s.o.b. that I am, Alan should receive my postcard sometime before the first of July. (Note to Alan: It's on its way! Really!) 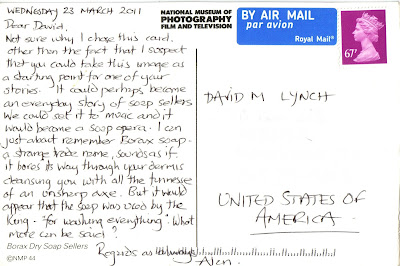 (I wish I could say that my handwriting is as nice as Alan's. Sometimes, it almost is, and other times, it can be described with the not-so-polite term "chicken-scratching." I can only assume this will get worse. During the past few months, encroaching arthritis has periodically played strange tricks on my left hand -- and I'm left-handed, as "luck" would have it -- and more times than not, my hand painfully and automatically configures into something strongly resembling the Star Trek Vulcan Salute. But I digress.)

Alan's message to me was much longer than mine to him, amazingly! In case you can't read this post's second scan (and you don't feel like clicking on it), it is as follows:
Dear David,
Not sure why I chose this card, other than the fact that I suspect that you could take this image as a starting point for one of your stories. It could perhaps become an everyday story of soap sellers. [I suspect Alan is thinking of the ongoing saga of Pleasantview -- ended by Skip Simpson and myself last October -- from the Simpson/Lynch Studios blog.] We could set it to music and it would become a soap opera. [I may never forgive him for that line. I'm sure he heard my groan clear across the Atlantic!] I can just about remember Borax soap -- a strange name, sounds as if it bores its way through your dermis cleansing you with all the finesse of an unsharp axe. But it would appear that the soap was used by the King -- "for washing everything." What more can be said? [What more, indeed?!?]

Regards as always,
Alan
I know next to nothing about the Borax Soap brand in the U.K., but on my own side of the pond, the word will always be associated with a product known as 20 Mule Team Borax. This company goes back to the late 1800s -- further back than either Alan or myself, unbelievably -- and was the sponsor on both radio and television of a show called Death Valley Days. The host of that show's TV incarnation from 1964-1965 was an actor named Ronald Reagan, in one of his last acting roles before entering an occupation closely related to acting... that of politics.
Hm. I wonder how Mr. Reagan (a former Democrat who had "converted" to the Republican Party in 1962) felt about being sponsored by a product whose "mascots" were twenty mules, symbol of the opposition party, as it were?
(By the way, fellow babies, there's an entertaining little "Easter Egg" of a joke if you're agreeable enough to click on all the links in today's post!)