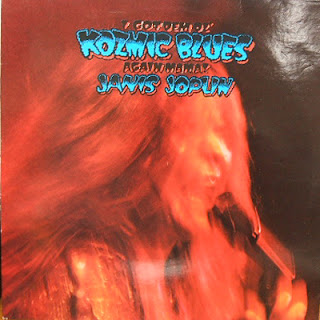 Today's post is an unoffical follow-up to my last post, entitled "The Grammar Nazi." So why, you wonder, does this post feature a Janis Joplin LP as its prominent illustration?
1. I wasn't about to use the "Grammar Nazi" symbol again, because it looks too much like the real Nazi flag (as it was meant to, of course). And real Nazis suck.
2. Even if I had used the "Grammar Nazi" symbol again, a quick glance at this post might make you think "Oh, I already read that one!" You'd skip it.
3. I ripped off was inspired by her album's title when I came up with my post's title. Obviously.
4. I love Janis Joplin, and it's my freakin' blog. Heh.
Anyway, fellow babies...
I've blogged about spell-checkers before (notably here) but here I go again.
When I write (or even read) documents, type emails, or when I compose posts or comments on Blogger, my/their spell-checkers automatically underline words in red when they're wrong, or when the spell-checkers "think" they're wrong.
For instance, when I wrote a recent post about Keair Snyder's book, Castles Made of Sand, the spell-checker underlined "Keair" in my draft. I got rid of that problem with the "add to dictionary" function.
Words like "storyline" (my preferred form) are often pointed out as "wrong." The suggested fixes? "Story-line" and "story line." Screw that. "Add to dictionary" to the rescue once again!
"Leave me alone, Mr. Spell-checker!"
Wednesday, however, I was commenting on someone else's blog. I typed the word "advisor" and got a red line! Suggested fixes? "Ad-visor," "ad visor," "adviser," "advisory," and -- and this is my effin' favorite! -- "advisors!" So, "advisor" should be "adviser," but if it's plural, it's "advisors?" WTF?!? Even though I was 99.999% sure of myself, I checked online, and (naturally) "advisor" is indeed correct!
That's why I don't trust them much, except to catch most of the typos!
"Leave me alone, Mr. Spell-checker!"
Thanks for your time.
Posted by The Silver Fox at 9:45 PM 14 comments: 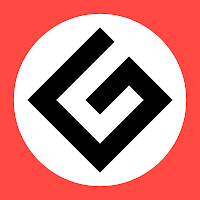 Pat Hatt and his cat Orlin*, of It's Rhymetime fame, have called me a "Grammar Nazi."


(*Don't ask. I mean, what kind of nut would ever make the claim that one or more of his blog posts were written by a cat, right? Heh.)

Well, it's true that I'll occasionally make wisecrack comments about spelling errors, typos, grammatical glitches, and the like, but I only do it once in a while. If I were to imperiously correct every "mistake" I see on blogs, and on the internet in general, I'd sleep a lot less than I do already... and I'd be a lot less popular!

Admittedly, I used to be much worse... like, in my high school days. I'll quote here from "My Island," a lengthy (and all-true) storyline published on my old David'Z RantZ blog:

[Patty] was remarkably tolerant of my irritating habit of correcting her (and others). I say "remarkably" because for the most part, Patty wasn't all that tolerant of anyone's overbearing traits. But don't get me wrong, being tolerant didn't mean that she was totally accepting of my constant corrections. In fact, after she'd sent enough good-natured insults my way in return, I broke the habit. By that time, however, Patty had begun calling me by the nickname of "Professor." In later years, she only used it occasionally; she resurrected the name whenever she needed advice, answers to trivia questions, etc.

Anyway, fellow babies, in Pat's (and Orlin's) honor, I decided to retroactively add a "Grammar Nazi" label to any and all of my posts here on The Lair of the Silver Fox which talk about grammatical errors, spelling snafus, and virtually anything else related to the complexities of the English language! In fact, I did the same thing with the applicable posts on my old, retired David'Z RantZ blog!

And finally, although I can't embed it on this page, here is a link to a short YouTube video about Grammar Nazis... cuz I'm not the only one!

Thanks for your time.
Posted by The Silver Fox at 2:25 PM 26 comments: 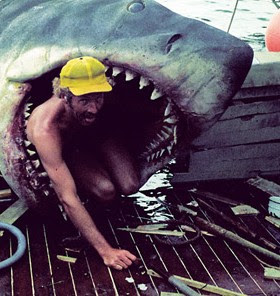 Hey, isn't that Chuck Norris?
I mean, only Chuck Norris could calmly pose in the mouth of a great white shark, right?
Nahhhh, it's not Chuck Norris. In fact, here's the original, uncropped version of that photo: 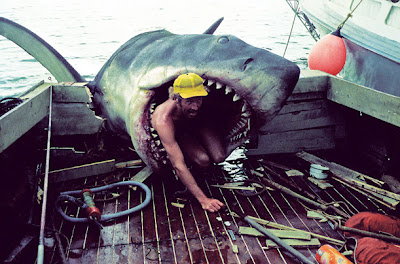 This photo and thus, the cropped version at the top of this post as well, are copyright ©
1974 Cal Acord, from Jaws: Memories from Martha's Vineyard by Matt Taylor.
It's only one of a really cool series of behind-the-scenes shots from the making of Jaws, courtesy of TIME magazine. Check 'em out!
(And thanks to Betsy for sending me the original link!)
Hey... Speaking of TIME magazine, does anybody out there remember Skip Simpson's occasional "Soused Chef" posts? 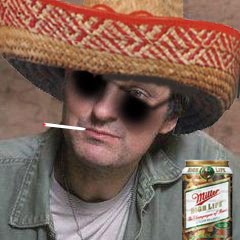 They first appeared on his now-deleted Skip's Stuff blog, and when he "killed" that blog, he and I transferred those posts to our Simpson/Lynch Studios blog!
Well, take a gander at this, fellow babies!
My question is: Can Skip sue? Heh.
Thanks for your time.
Posted by The Silver Fox at 12:35 AM 7 comments:

Only ONE of These REALLY Counts... 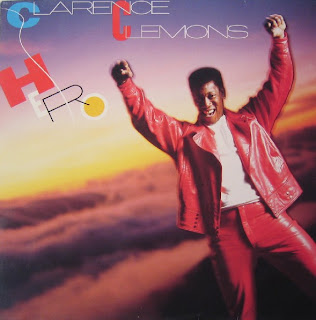 Two deaths were "announced" this past week, and as it says in my title, only one of them really counts.
Clarence Clemons, the incredible saxophonist best known as Bruce Springsteen's "soul-mate" in the E Street Band, passed away this week at the age of 69. I was a relatively late convert to Springsteen's music (late 1970s), and as we all entered and muddled through the 1980s, it seemed like "The Big Man" was all over the place... and I loved it. He was appearing on cuts by such notables as Aretha Franklin, did a duet with Jackson Browne, etc.
My then-fiancée bought me a copy of the above-pictured LP for either my birthday or Christmas in the mid-1980s.
I've been complaining lately of a mild form of Writer's Block, so I'm gonna wimp out here and direct you to an excellent tribute by fellow Blogger-blogger Roy Hilbinger instead of attempting one of my own.
And I'll get back to Mr. Clemons in a moment, but first...
Hey, comic books fans, they've just announced that Marvel Comics' biggest "solo act," Spider-Man, is going to be killed! Oh, my God! What monumental news, huh? 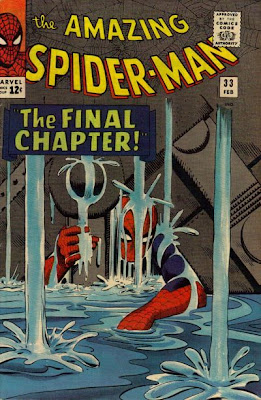 Feh. Don't you believe it. As this article explains, it's not the "real" Spider-Man, just the one who appears in an "alternate universe" called "the Ultimates."
There's a saying in comics that goes back almost fifty years: "Nobody dies forever." Remember around twenty years ago when they "killed" Superman? He... errr... got better. And although they're saying that the Ultimate Spider-Man won't, even if he doesn't... it's not like that'll affect the so-called mainstream Marvel Universe.
Or the real world, certainly.
I wish we could apply that "Nobody dies forever" cliché to real life. I'd love to see the Big Man take the stage again...
I'm giving you a choice today, fellow babies. If you want to hear something moody featuring Clarence Clemons, here's a cut (penned by Steven Van Zandt) from Gary U.S. Bonds' 1981 comeback album, "Dedication."

And if you want something much more upbeat, here's the title track from the same LP.
I suggest you crank it -- or them, if you're like me, and want to hear them both -- as loud as your eardrums and neighbors can stand.
R.I.P., Big Man.
Thanks for your time.
Posted by The Silver Fox at 7:38 PM 20 comments:

We Interrupt This Sabbatical... 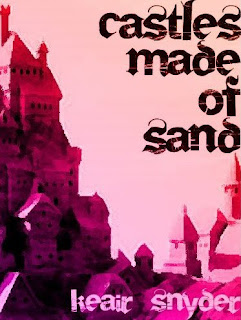 Only a few short days ago, I posted that I would be away from blogging "until further notice." And I meant it. No, really.
One of the reasons is that I've recently felt that my creative juices were somewhat dried up for the moment. And that hasn't changed.
However, that doesn't keep me from appreciating -- and highly recommending -- someone else's creativity, and passing along the good news to you, fellow babies.
Castles Made of Sand is a book by a young author who has crafted an amazingly authentic-sounding historical fiction novel about the 1960s (starting in 1964), and the years that followed. If you're at all interested in the music of the time, and/or the political movement(s) of that era as well, I strongly suggest you follow this link. (It's offered only on Amazon's Kindle, but there's a way you can order Kindle books for your PC without actually owning a Kindle device.)
Here's the review I posted on Amazon.com:
I was born in 1956, so although I lived throughout the 1960s and early 1970s, I wasn't involved in the so-called counter-culture while it was happening. Neither was the young author of this lengthy, amazing work of historical fiction -- she wasn't even born until years after most of the events discussed herein -- but you'd be hard-pressed to discern that from reading it. Keair Snyder has done an astounding amount of research in order to make both the historical figures and the original characters in this book ring true for the reader. Outside of the typographical errors which I've joked about with the author herself -- errors that invariably result when one proofreads one's own work countless times -- I found nothing negative in the book. Its story, and the way it's told, are compelling enough for me to recommend it highly. Listing all the ways in which this novel impressed me would make this review almost as long as the book itself, so I won't. Suffice it to say that there's a great mix of actual facts and conjectures about what many of the musical and political icons of the era were like when "off-camera." It's entertaining, and all too believable.
Now all you have to do is click on that link and order the more-than-reasonably-priced book! And tell 'em Foxy sent ya!
Thanks for your time.
Posted by The Silver Fox at 9:40 AM 11 comments: 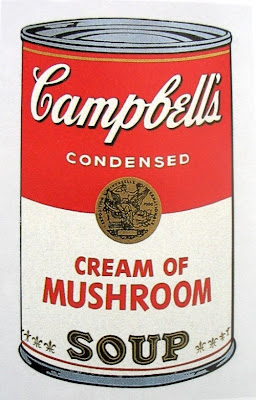 ©Andy Warhol (Click here if you want to
know the story behind the soup can!)
Or, if you've been waiting for Orson's latest post, rather than mine... 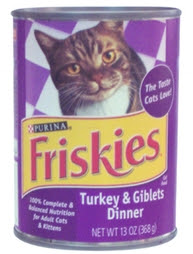 Thanks for your time.
Posted by The Silver Fox at 11:30 PM 8 comments: