What Has Come Before:

Our story is being narrated by "Woody," a mid-thirtyish New Englander who is currently in Iowa.

Helping out Eve, a slightly younger, pretty married woman he'd met at a truck stop, Woody ends up transporting her (in his sister's Corvette, which he'd borrowed for the trip) to a motel during a terrible blizzard. After dealing with the curmudgeonly motel manager, a totally bald elderly fellow, Woody and Eve go to their motel room.

The room's heater is broken, and the two end up sharing a bed -- a rather large bed -- for a strictly platonic session of sleep. 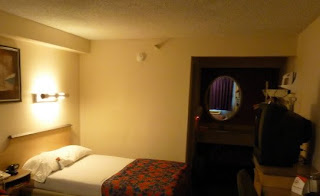 The next morning, I awoke to find myself alone in the bed. Eight million movies I've seen told me immediately what had happened. She'd stolen my keys -- okay, okay, Julie's keys -- and stolen the Corvette, leaving me stranded in this little motel.
I leaped out of bed, threw off the bathrobe, and reached for my pants.
It was then that the bathroom door opened, and Eve emerged. She was wearing the same outfit as she had when I'd met her, of course. Her hair was still up, and looked wet. I assumed she'd taken a shower before dressing.
"Good morning, Woody," she said.
"Uhhh... Hi, Eve." I felt a little embarrassed that I was standing there in my underwear with no pants on. (I would've been even more embarrassed if she'd known what I'd been thinking about her... but I wasn't about to tell her.) It's not like she was staring, or anything -- she wasn't -- but she wasn't looking away, either.
"I figured I'd let you sleep," she said.
"What time is it?" I never wore a watch.
Naturally, she did. "It's still early. Not even nine." While I put my pants on, she sat down on what had been her side of the bed last night. "Last night was... very strange, and very unusual... for me, Woody. To say the least."
"Yeah, for me, too."
"I've never slept with anyone but my husband in eleven years of marriage."
"We didn't sleep together," I protested. "I mean... well... yeah, we did sleep together, but..."
She laughed and nodded. "I meant it literally. I've never shared a bed with any man but Russ, in any sense of the term. Especially one I knew nothing about! And I want to thank you for not... trying anything."
"Mm." I was uncomfortable with what she was saying, somehow, and tried to make a joke of it. "Well, I was pretty tired, you know?"
"You say that like you would have tried something if you hadn't been tired, and... well... I doubt that."
"You're right. I wouldn't have."
"I wasn't worried about being raped, certainly, or I never would have invited you into the bed with me -- Lord, that sounds awful! -- but you didn't even make a..." She hesitated.
"Make a pass at you?" I said.
"I was going to say... make an attempt to seduce me, or even cuddle up to me."
"Well, to be honest, Eve, I didn't think you'd reciprocate. I was right in assuming that, wasn't I?" She nodded again. "Good! Because I think you're a freakin' doll..."
"So you keep saying," she said, cheerfully.
"And if I thought I'd passed up a chance at a little extra warmth, shall we say... I'd really regret it." She looked a little uneasy. "I meant that as a compliment."
"I know, Woody. I'm just not used to compliments."
"That's kinda hard to believe. Women who look like you usually get more than their share."
"No. No. Not me."
"Oh. Shame. You're really beautiful," I said, meaning it. We were both silent for an uncomfortable minute. "You're right about one thing, though. We really don't know anything about each other. We know each other's names, I know you have a husband named Russ, you know I have a sister named Julie, and..." I paused.
"And?"
"And I know you and your husband are on the outs in some way, or you would have called him last night." A second, grimmer thought struck me. "Or... He is still alive, right?"
"What the devil is that supposed to mean?"
"You could be a widow, for all I know!"
"Oh! I thought you meant something more sinister, like..."
I started laughing, and slipped into my piss-poor Bogart voice again. "Or maybe you offed the poor bashtard, and took it on the lam, shweetheart?" She laughed. I continued, in my normal voice. "No, don't worry, doll. I think you're about as likely to kill someone as I am to..."
"To rape someone?" she suggested, playfully.
"Yeah. Heh. You see? We know plenty about each other! We both know that I'm no criminal, and neither are you!" I thought for a moment. "Well, we'll have plenty of time to learn about each other while I drive us back to that truck stop, assuming I can even find the freakin' thing!"
"I wouldn't get your hopes up where that's concerned, Woody."
What did that mean, I wondered? Was she lapsing back into last night's veiled insult habit? "Why? Are you saying you don't want to learn more about me?"
"No, silly, nothing like that! I mean..." She stood and walked toward the drapes covering the picture window near the useless room heater. Opening them -- and flooding the room with brightness -- she said, "Well, see for yourself." 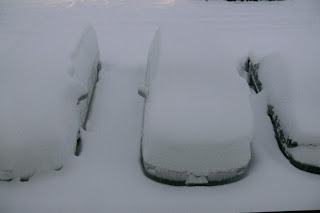 All I could see was snow. Well, pretty much. We'd arrived in the middle of one hell of an overnight blizzard which was still raging. The snow was higher than the base of the picture window, in fact.
"I'd imagine that your sister Julie's Corvette is buried by now," she said. "I doubt we're going anywhere anytime soon!" 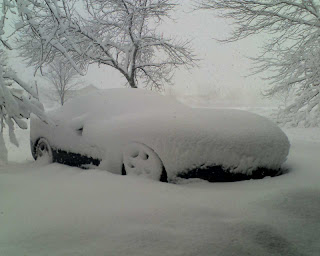