The Elusive Grammy Josephine, Part One -- A "Sepia Saturday" Post 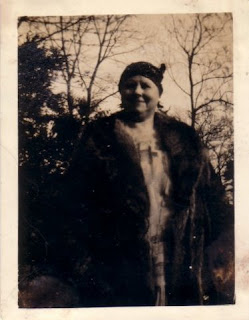 The above photo, taken sometime in the 1920s, is of my mother's mother, born Josephine Matukaitis. Sometime around the beginning of the 20th century, she married my mom's father, Peter Stremekes, and after having had seven children -- perhaps more, as it's rumored that one or even more died in early infancy -- in the space of fifteen years, she abandoned her husband and children when my mother, her youngest, was only two years old. This would have been the ending of a marriage that had lasted roughly twenty years.
As I've told in previous Sepia Saturday posts, my grandfather only lived for another eight years or so before his death in 1927, when my mother was nine years old. My mom's sister Josie -- named after her mother, obviously -- and her husband, Joe Korsak, took in the other six children... and I use the term "children" loosely, as some were already adults.
Today's post, and its follow-up, too, will differ from my others in two respects. For one thing, instead of dealing with a specific and limited period in the family history, I'll be doing a brief overview of my grandmother's life. Secondly, because no one is still alive who was around when all the crap hit the fan, as it were, I'm going to include a bit more conjecture than usual in this first installment.
The biggest question in my mind -- and one that was never directly addressed when my mother, grandmother, and various uncles were alive to discuss events with the not-yet-Silver Fox -- is why my grandmother left her husband and children.
Oh, sure, we know she ran off with a guy named Dominic Darasz (shortened from a name I can't even make an attempt at trying to spell), and that it took about four years before the official divorce decree was issued on the grounds of "desertion and adultery."
We also know that sometime during prohibition, she was a "bootlegger" of sorts. And before you picture my Grammy Josephine as a stereotypical Capone-style "gun moll," let me mention that, according to my mom, this so-called bootlegging amounted to little more than my grammy selling a bottle or two of homemade hooch at roughly two dollars a pop to customers who appeared at her home.
But as for why she left her family when, and how, she did... I can only guess.
Times were harsher then in a lot of ways. It was the era in which women in the USA were either about to, or had just, been granted the right to vote (depending on exactly when grammy ran off). Maybe she was ahead of her time, and after twenty years of familial servitude, decided there was more to life than being a baby-making machine married to a man roughly ten years older than she was. Maybe the thrill of whatever Dominic had to offer was something she'd yearned for for who knows how long. (Ew. This is my grandmother I'm writing about, here!)
I'm not going to dream up stories of my grandfather's possible failings as a husband, for none of those stories would be supported by anything I've ever heard, certainly.
I don't know if she simply vanished one night, or if there was one huge argument which some or all of the older children witnessed, or perhaps a series of verbal skirmishes which culminated in her disappearance. By the time I was born, my Aunt Josie and Uncle Joe were both two years gone, and my uncles never talked about those days except to say that she'd left. Period. Nobody provided any details, ever.
Other than the one photo of my grandmother that I showed in my "Heroes and Villains" post, the earliest photos of her which I have are from 1927, so I can only surmise that it wasn't until after the death of her husband that she had the nerve to return to the family. Over the years, acceptance of her return was achieved slowly, and not so surely, as far as what I've been told.
The following picture, taken that year, shows my Grammy Josephine, Dominic (who may or may not yet have been her legal husband), my twelve-year-old Uncle Eddie, and my ten-year-old mom, Anita.
My mom doesn't look too pleased to be in the shot. I've mentioned before that most early photos of my mom show her with some sort of grimace, most likely caused by facing the sunlight when a photo was taken, but my sardonic sense of humor suggests that Dominic's hands are not on my mom's shoulders in a display of affection, but are there instead to keep little Anita from running away from the man who "stole" her mom from her!
The next picture is a group photo of most of the Hartmans (the Stremekes name having been "replaced" years earlier) and Korsaks, as of 1947. 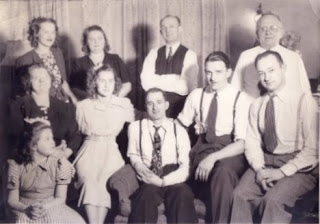 From left to right, starting with the top row: My Aunt Esther, wife of my mom's brother Billy; Josie Korsak; Josie's husband, Joe Korsak, standing almost like the family patriarch, which in a lot of ways, he was; my grandmother's husband, Dominic Darasz. On the far left in the middle row is my grandmother, Josephine Darasz; I believe that the next woman is my Uncle Eddie's wife, Olga, obviously before their divorce; my Uncle Johnny; my Uncle Eddie; my Uncle Billy. In the front row, such as it can be called a "row," is my cousin Janice, daughter of Aunt Josie and Uncle Joe. (Yep, even after having "put up" with my mom and her brothers, they finally had two kids of their own, brave souls! That's just a joke.)
Noticeably absent from the picture are: My cousin Joe, Janice's younger brother, who would have been about nine years old; my Uncle Al (whom I'm guessing held the camera, as he was the family shutterbug); my own mom and dad; my Uncle Peter and his wife Anna. Presumably, those last four were nowhere around on the day of this family portrait.
My grandmother lived for another twenty-two years after the above photo, but I'm going to stop this part of her story here. This post is becoming as long as one of my regular Silver Fox entries, and I know that many of you have other Sepia Saturday-related blogs to visit. Hope you join me in two weeks for Part Two, where I tell how, while she may have had her drawbacks as a mother, my Grammy Josephine was a really sweet grandmother!
Thanks for your time.
Posted by The Silver Fox at 12:12 AM