My grandmother, Josephine Matukaitis (later Josephine
Stremekes, then Josephine Darasz), in the 1950s. An odd
shot, admittedly, which looks almost like a police mug shot!
I hope this Sepia Saturday post won't be too much of a let-down after my last Sepia Saturday post, "The Elusive Grammy Josephine, Part One." Part One shows a younger woman that was much more colorful, I'm afraid.
As I wrote earlier: By the time my mom, "Grammy" Josephine's youngest child, was two years old (circa 1919), my grandmother had given birth to at least seven children -- I say "at least," for there are rumors that one or more may have died when very, very young -- in the space of fifteen years. Then, for reasons never explained in any detail to those of my generation, she left her husband (and my grandfather), Peter Stremekes... and her children.
My Grammy ran off with a man named Dominic Darasz, and for a while, during Prohibition, she was known to sell bottles of "bootlegged" booze to people who'd knock upon her door and pay a couple of bucks for an illicit thrill, 1920s style!
I'm sure it wasn't an easy decision to leave her children. I can only guess at the handful of variables which prompted her actions. And while I was growing up, no one -- not my grandmother, certainly, nor my mother's brothers who were old enough at the time of her desertion to remember things clearly -- ever deigned to discuss such matters with the young and far-from-Silver Fox.
Somewhere around the time when her ex-husband died in 1927, Grammy Josephine made her initials attempts to rejoin the family. I'm told it was a slow and painful process, as you may well expect. That's probably the main reason I don't have many photos of her until almost thirty years later.
I didn't see a lot of my "Grammy" while growing up, mainly because most of my family lived in Massachusetts, while she and her husband Dominic lived in Rhode Island. We didn't visit often. In fact, the only clear memories I have of that period are of a very realistic (but artificial) stuffed cat with long white fur that she owned, and a conversation she was having with my mother about Dominic -- who was in the same room, I should add! -- and the fact that his mental faculties seemed to be failing somewhat. I would have been about four or five at the time. "He talks a little funny," she said, to which Dominic -- no doubt a tad upset with being discussed as if he weren't there -- replied, "He talk funny, he talk funny," in a mocking, sing-songy way.
Dominic died in 1963, I believe, probably a year or two after this odd visit.
Luckily, my sister Kathy has more vivid memories of our Grammy than my own, and she was nice enough to supply me with some rough notes:
"Grammy" used to always have a bottle of Coca-Cola and a Clark bar every time we saw her in Providence, RI.
Used to have only one type of houseplant -- OXALIS. As long as I have had my own home, I have had at least one for myself. So far, after 4 varieties, still haven't got the kind she used to have in her kitchen. [Good luck finding the right one, Kathy. There are over 800 varieties of Oxalis! -- S.F.]
Used to sweep porch, steps, and sidewalk. Every now & then she would take dishwater and pour it out on the walk to wash it. I guess she was a clean freak. I never washed a sidewalk w/out poop on it. [My sister owns two dogs, and although their "poop activities" are confined to her backyard, the same cannot be said of her neighbors, I guess. -- S.F.]
Every Easter I got a stuffed toy.
Ah, yes, the stuffed toys. Below, you'll find two photos of my grandmother. The first shows her beside my mother, dated "Mother's Day 1955" on the back. I suspect my four-and-a-half-year-old sister took the picture, because of its upward angle. The following shot, presumably taken by my mother on the same day, is of Kathy and Grammy Josephine. Kathy holds her present for Easter, 1955. 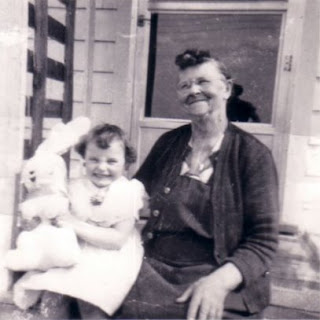 Awww, the poor little kid. Doesn't Kathy look miserable?
The next photo was taken in the late 1950s or early 1960s. I have no idea who the two women are on either side of my Grammy in the front row. In the back row are my Uncle Eddie, my Uncle Al, and... well... whoever the third man is, I'm pretty sure it's not Dominic. This guy looks too short, upon comparison to a 1927 shot of Dominic published in my last Sepia Saturday post.
Finally, this 1960s photo is of my Grammy and her sister, my mom's flamboyant Aunt Julia. Julia will get her own post -- or two -- sometime in the future.
When my Grammy died in 1969, I was twelve years old. My sister and I were present when my mother was going through Grammy's belongings. This was at the height of the so-called "hippie" era, and Kathy and I were amazed to see an ancient purple handkerchief, which had been "tie-dyed" several years earlier. And we thought the hippies had invented tie-dyeing!
At Grammy Josephine's funeral, I remember detecting an eerie lack of emotion from my uncles, no doubt caused by Grammy's earlier abandonment of the family. But be that as it may, whatever her faults and failings as a mother, she was a damned good grandmother.
I miss her...
But not as much as my sister does, I should add. Kathy remembers her much more clearly, of course, being six years older than I.
Shortly before my sister Kathy graduated high school in 1968, she gave my Grammy one of her senior yearbook pictures. (The photo fell into the hands of my mother when Grammy died, and when my mom passed away last year, I wound up with it.) On the inside of the folder which contains the photo, my sister wrote "to my favorite grandmother," which says more about my family history than I may ever share with you here.
Thanks for your time.
Posted by The Silver Fox at 1:45 AM