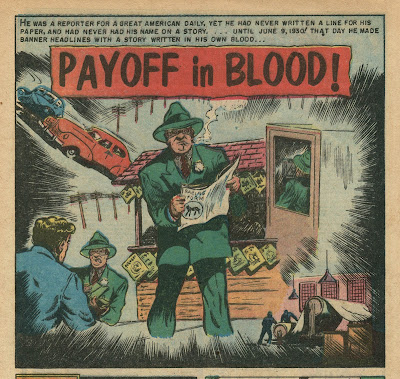 The above illustration is the splash panel to a story called (obviously) "Payoff in Blood!" The story, which appeared in Gangsters and Gunmolls #4 (June, 1952), was a story about the murder of Jake Lingle, a Chicago Tribune reporter who had connections with Al Capone.

(A little aside here: The proper, legal title of this comic book certainly appears to be Gangsters and Gun Molls, right? That's certainly the way it appeared in ads for the title, and various text pieces back then. 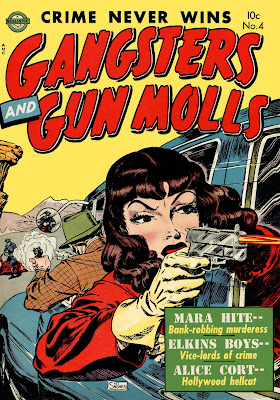 Well, the page that contains information like a comic's title, publisher, publication date, publication frequency, and the like is called the indicia. Here's the indicia for this comic book:

So, you see? The title is legally Gangsters and Gunmolls, as I wrote above! See how carefully I [usually] research this crap for y'all, fellow babies?!?)

Now, here's an additional wrinkle: Lingle's story contains several references to Lingle himself, Al Capone, George "Bugs" Moran, and other notable criminals of the 1920s and early 1930s, but you'll find none of those names in this story. I suppose that someone in the publisher's legal department figured there'd be enough relatives of the true-life characters to bring a lawsuit or two or three. So Jake Lingle became "Jack Long," Capone was "Joe Reynold," Moran was "Ed Sumner," etc.

All of these changes were made right before publication. You can tell that many of them are paste-overs if you look closely at the lettering.

But you know what? None of this really matters, because I'm not here to discuss the story with you! Nope. Instead, I'm just going to discuss the effed-up coloring, as I did in my last Comical Wednesday post! (In other words, you just got stuck reading a long-ass introduction for an equally long post.)

So, here's how it breaks down.

Our colorist made heavy use of yellows, greens, and browns. That's because the four-color process these people had to work with was extremely limiting in those days.

The limitations I mentioned above are why my picky little comments during the rest of this post will not include wisecracks about how the colorist dressed someone in an all-red suit (and hat), or a bright green suit & hat, or a bright yellow suit, etc.

Nope, my comments aren't about silly choices. My comments are about the colorist's consistency, or lack of same.

So here we go! Jack Long, a guy in a green suit, is murdered by a guy in a brown suit... and yellow gloves.

This is followed up by a shot of a woman wearing a yellow outfit (with a green hat and matching handbag, no less). 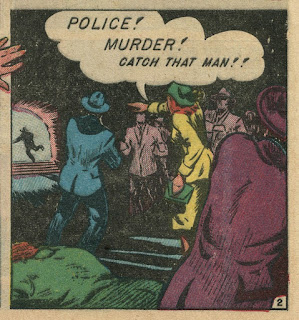 Suddenly, though, our murderer has inexplicably changed his brown suit for a yellow one. That's in this first panel, anyway. In the second panel, our killer appears to be standing behind the cop who's chasing him, doesn't he? But nope! That's just an innocent man in the crowd, whom the colorist either assumed was the killer, or – as is my guess – the colorist just didn't care.

In this panel, they find the yellow glove the killer dropped. 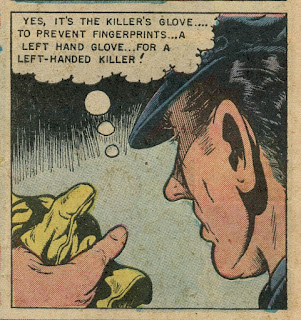 Now, here we are, later in the story. (Actually, earlier. This is a flashback sequence.) Jack Long, the reporter in the green cap, white shirt and red tie in panel one, is wearing a red shirt and tie in the second panel. Of course, one has to look closely to notice the tie at all, due to its being miscolored. And notice also that the policeman took the time to shave off his handlebar mustache between one panel and the next. Can't blame the colorist for that, though. 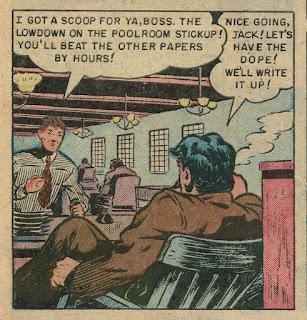 Much later in the story! A hired killer totally unrelated to any other we've seen so far just happens to be wearing a yellow suit. 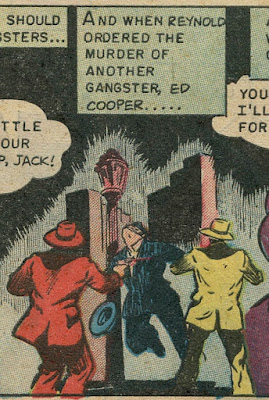 And shortly thereafter, we see yet another guy wearing one of those oh-so-stylish yellow ensembles! 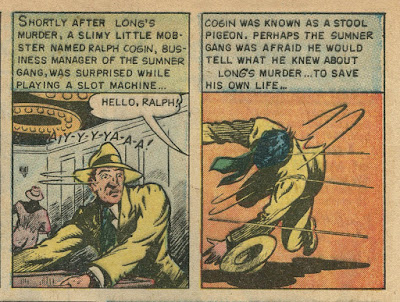 The guy here wearing the green cap and the yellow jacket only appears in this panel. But who knows, he may have been taking fashion tips from the woman I showed you earlier! Anyway, he gives a tip to an undercover man dressed in purple. 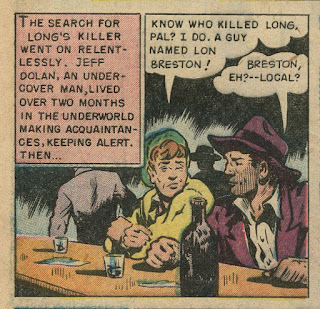 The tip leads the police right to Long's killer, now identified to the reader as “Lon Breston,” the guy who'd worn the yellow gloves. Here, as then, Breston is wearing a brown suit and hat, but by now, I'm convinced that he was just colored appropriately out of dumb luck. 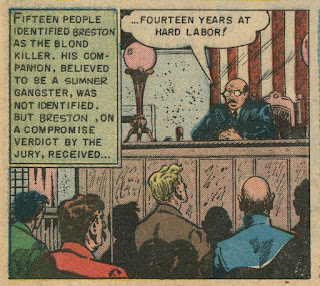 The “blond killer” is convicted. I don't know about you, but I'm rather impressed that so many witnesses even noticed that Breston was blond, since he wore that brown hat at the time of the murder.

Oh, and I want to point out here that the “all-important” clue mentioned earlier, the yellow glove that Breston dropped, was in no way responsible for Breston's apprehension and conviction! (Or if it was, the story's author didn't see fit to share that little fact with us.)

Now, I suppose at this point, you might be thinking, “Okay, fine. The colorist was a lazy and/or clueless s.o.b. who, in all fairness, shouldn't really have been expected to read the story he had to color. So what?”

Well, I just pity the poor little kids who had to read this story and do the mental gymnastics to understand who was who in the various scenes. But I'm funny that way.

Thanks for your time!

P.S. ~~ TerrifiCon Update! The TerrifiCon website has released a list of prices that various celebrities (that's media celebrities, not comic book creators) will be charging for signatures on various items. These fees range from $25 to $110. Not for me, thanks. I'd rather spread my money around to the thirty or so comic book creators on my list! The celeb I was most looking forward to getting an autograph from was Val Kilmer, but to save $80 -- yes, $80 -- I'll just sit at home and watch Tombstone for the tenth time.
Posted by The Silver Fox at 5:00 AM